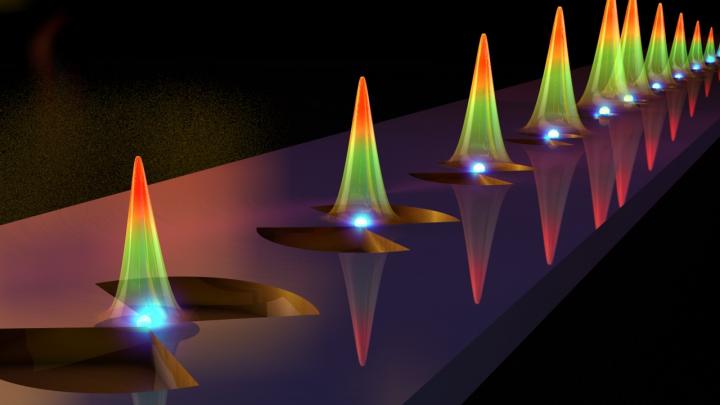 A Vanderbilt team found the answer in a formula familiar to college physics students – a solution so simple and elegant, it was tough for reviewers to believe. Professor Sharon Weiss, her Ph.D. student, Shuren Hu, and collaborators at the IBM T. J. Watson Research Center and University of Technology in Troyes, France, published the proof in today's Science Advances, a peer-reviewed, open-access journal from AAAS.

They developed a structure that's part bowtie, part funnel that concentrates light powerfully and nearly indefinitely, as measured by a scanning near field optical microscope. Only 12 nanometers connect the points of the bowtie. The diameter of a human hair is 100,000 nanometers.

“Light travels faster than electricity and doesn't have the same heating issues as the copper wires currently carrying the information in computers,” said Weiss, Cornelius Vanderbilt Endowed Chair and Professor of Electrical Engineering, Physics and Materials Science and Engineering.

“What is really special about our new research is that the use of the bowtie shape concentrates the light so that a small amount of input light becomes highly amplified in a small region. We can potentially use that for low power manipulation of information on computer chips.”

The team published its work as a theory two years ago in ACS Photonics, then partnered with Will Green's silicon photonics team at IBM to fabricate a device that could prove it.

The research began with Maxwell's equations, which describe how light propagates in space and time. Using two principles from these equations and applying boundary conditions that account for materials used, Weiss and Hu combined a nanoscale air slot surrounded by silicon with a nanoscale silicon bar surrounded by air to make the bowtie shape.

“To increase optical energy density, there are generally two ways: focus light down to a small tiny space and trap light in that space as long as possible,” Hu said. “The challenge is not only to squeeze a comparatively elephant-size photon into refrigerator-size space, but also to keep the elephant voluntarily in the refrigerator for a long time. It has been a prevailing belief in photonics that you have to compromise between trapping time and trapping space: the harder you squeeze photons, the more eager they are to escape.”

Weiss said she and Hu will continue working to improve their device and explore its possible application in future computer platforms.