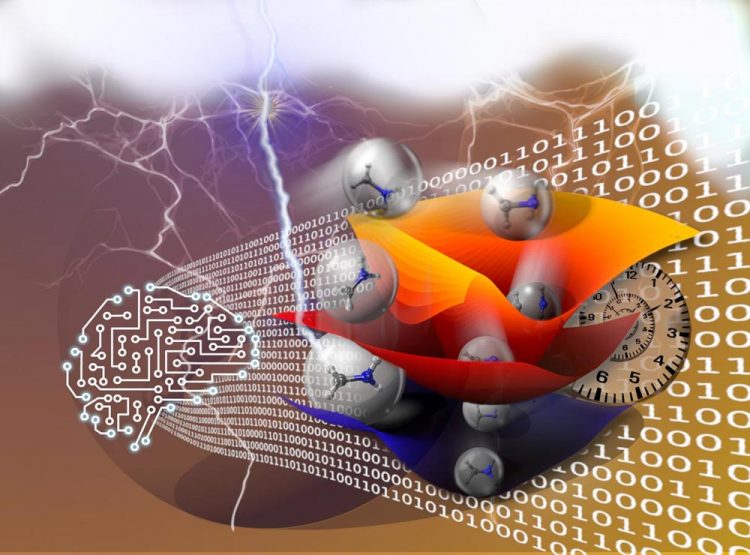 Illustration to the study, which appeared on one of the covers of "Chemical Science": Artificial neural networks help to drastically accelerate simulations of photoinduced processes. Credit: © Julia Westermayr, Philipp Marquetand

The prediction of molecular reactions triggered by light is to date extremely time-consuming and therefore costly. A team led by Philipp Marquetand from the Faculty of Chemistry at the University of Vienna has now presented a method using artificial neural networks that drastically accelerates the simulation of light-induced processes.

The method provides new possibilities for a better understanding of biological processes such as the first steps of carcinogenesis or ageing processes of matter. The study appeared in the current issue of the journal “Chemical Science“, also including an accompanying illustration on one of its covers.

Machine learning plays an increasingly important role in chemical research, e.g. in the discovery and development of new molecules and materials. In this study, researchers from Vienna and Berlin show how artificial intelligence enables efficient photodynamics simulations.

To understand photo-induced processes, such as photosynthesis, human visual perception or skin cancer, “we need to understand the motion of molecules under the influence of UV light. In addition to classical mechanical calculations, we also need quantum mechanics that is computationally extremely demanding and therefore cost-intensive,” says Philipp Marquetand, author of the study and scientist at the Institute of Theoretical Chemistry.

With previous methods, researchers were only able to predict the fastest photo-induced processes in the picosecond range (1 picosecond = 0.000 000 000 001 seconds) – with computation times of several months. The new method uses artificial intelligence to simulate over longer periods, in the range of one nanosecond (1,000 picoseconds), with considerably less computation time.

In their approach, the researchers use artificial neural networks, i.e. mathematical models that imitate the functioning of our brain. “We teach our neuronal network the complex quantum-mechanical relationships by performing a few calculations beforehand and passing the knowledge on to the neural network,” says first study author and uni:docs fellow, Julia Westermayr from the Institute of Theoretical Chemistry. Based on its knowledge, the self-learning neural networks will then be able to predict what will happen more quickly.

As part of the study, the researchers carried out photodynamics simulations of a test molecule called methylenimmonium cation – a building block of the molecule retinal that enables our visual processes. “After two months of computing, we were able to reproduce the reaction for one nanosecond; based on previous methods, the simulation would have taken about 19 years,” says PhD student Julia Westermayr.

A Proof of Concept

In the nanosecond range, the majority of photochemical processes take place: “With our strategy, we are entering a new dimension of prediction. In principle, the approach we are presenting can be applied to a wide range of smaller molecules, including DNA building blocks and amino acids,” says Philipp Marquetand.

In the next step, the researchers want to use their method to describe the amino acid tyrosine. Tyrosine occurs in most proteins, and it is suspected to promote blindness and skin ageing after being damaged under the influence of light. According to the study authors, the presented strategy in general could foster better predictions of light-controlled processes in all respects, including material ageing and photosensitive drugs.