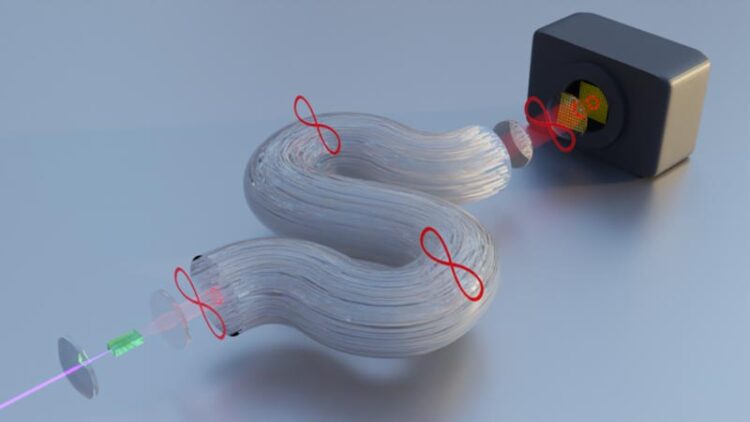 Schematic overview of a phase-separated Anderson localization fiber as quantum channel between a transmitter and receiver. The illustration shows that quantum correlations such as entanglement are maintained during transport from the transmitter (generation) to receiver (detection) all the way along the fiber.
Credit: ICFO/ A. Cuevas

Invented in 1970 by Corning Incorporated, low-loss optical fiber became the best means to efficiently transport information from one place to another over long distances without loss of information.

The most common way of data transmission nowadays is through conventional optical fibers – one single core channel transmits the information. However, with the exponential increase of data generation, these systems are reaching information-carrying capacity limits. Thus, research now focuses on finding new ways to utilize the full potential of fibers by examining their inner structure and applying new approaches to signal generation and transmission. Moreover, applications in quantum technology are enabled by extending this research from classical to quantum light.

In the late 50s, the physicist Philip W. Anderson (who also made important contributions to particle physics and superconductivity) predicted what is now called Anderson localization. For this discovery, he received the 1977 Nobel Prize in Physics. Anderson showed theoretically under which conditions an electron in a disordered system can either move freely through the system as a whole, or be tied to a specific position as a “localized electron”. This disordered system can for example be a semiconductor with impurities.

Later, the same theoretical approach was applied to a variety of disordered systems, and it was deduced that also light could experience Anderson localization. Experiments in the past have demonstrated Anderson localization in optical fibers, realizing the confinement or localization of light – classical or conventional light – in two dimensions while propagating it through the third dimension. While these experiments had shown successful results with classical light, so far no one had tested such systems with quantum light – light consisting of quantum correlated states. That is, until recently.

A conventional optical fiber vs an Anderson localization fiber

Contrary to conventional single mode optical fibers, where data is transmitted through a single core, a phase separated fiber (PSF) or phase separated Anderson localization fiber is made of many glass strands embedded in a glass matrix of two different refractive indexes. During its fabrication, as borosilicate glass is heated and melted, it is drawn into a fiber, where one of the two phases of different refractive indexes tends to form elongated glass strands. Since there are two refractive indexes within the material, this generates what is known as a lateral disorder, which leads to transverse (2D) Anderson localization of light in the material.

The team of scientists, experts in quantum communications, wanted to transport quantum information as efficiently as possible through Corning’s phase-separated optical fiber. In experiment, the PSF connects a transmitter and a receiver. The transmitter is a quantum light source (built by ICFO). The source generates quantum correlated photon pairs via spontaneous parametric down-conversion (SPDC) in a non-linear crystal, where one photon of high energy is converted to pairs of photons, which have lower energy each. The low-energy photon pairs have a wavelength of 810 nm. Due to momentum conservation, spatial anti-correlation arises. The receiver is a single-photon avalanche diode (SPAD) array camera, developed by Polimi and MPD. The SPAD array camera, unlike common CMOS cameras, is so sensitive that it can detect single photons with extremely low noise; it also has very high time resolution, such that the arrival time of the single photons is known with high precision.

The ICFO team engineered the optical setup to send the quantum light through the phase-separated Anderson localization fiber and detected its arrival with the SPAD array camera. The SPAD array enabled them not only to detect the pairs of photons but also to identify them as pairs, as they arrive at the same time (coincident). As the pairs are quantum correlated, knowing where one of the two photons is detected tells us the other photon’s location. The team verified this correlation right before and after sending the quantum light through PSF, successfully showing that the spatial anti-correlation of the photons was indeed maintained.

After this demonstration, the ICFO team then set out to show how to improve their results in future work. For this, they conducted a scaling analysis, in order to find out the optimal size distribution of the elongated glass strands for the quantum light wavelength of 810 nm. After a thorough analysis with classical light they were able to identify the current limitations of phase-separated fiber and propose improvements of its fabrication, in order to minimize attenuation and loss of resolution during transport.

The results of this study have shown this approach to be potentially attractive for scalable fabrication processes in real-world applications in quantum imaging or quantum communications, especially for the fields of high-resolution endoscopy, entanglement distribution and quantum key distribution.