A nanoantenna for long-distance, ultra-secure communication 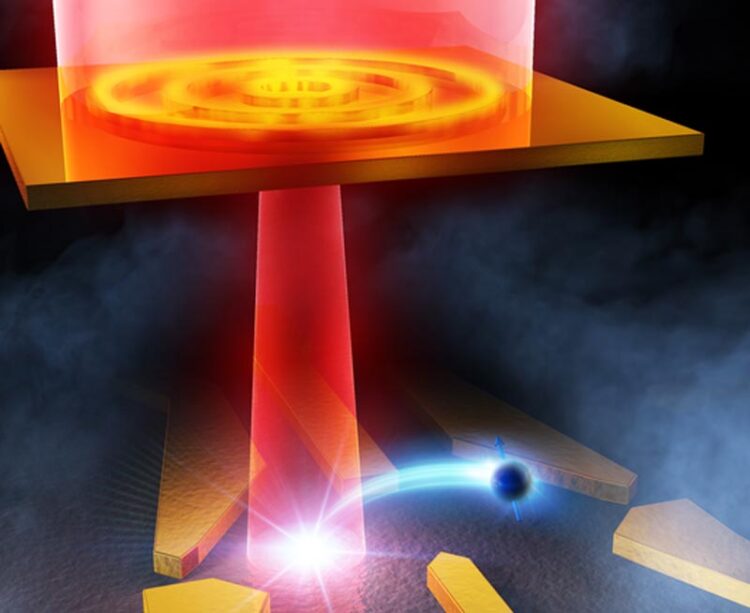 Conceptual illustration of efficient illumination of photons to semiconductor lateral quantum dots, by using a surface plasmon antenna and excitation of electrons in the quantum dots.
Copyright @ 2021 Oiwa lab. All Rights Reserved

Researchers from Osaka University have improved the transfer efficiency between quantum information carriers, in a manner that’s based on well-established nanoscience and is compatible with upcoming advanced communication technologies.

Information storage and transfer in the manner of simple ones and zeros—as in today’s classical computer technologies—is insufficient for quantum technologies under development. Now, researchers from Japan have fabricated a nanoantenna that will help bring quantum information networks closer to practical use.

In a study recently published in Applied Physics Express, researchers from Osaka University and collaborating partners have substantially enhanced photon-to-electron conversion through a metal nanostructure, which is an important step forward in the development of advanced technologies for sharing and processing data.

Classical computer information is based on simple on/off readouts. It’s straightforward to use a technology known as a repeater to amplify and retransmit this information over long distances. Quantum information is based on comparatively more complex and secure readouts, such as photon polarization and electron spin. Semiconductor nanoboxes known as quantum dots are materials that researchers have proposed for storing and transferring quantum information. However, quantum repeater technologies have some limitations—for example, current ways to convert photon-based information to electron-based information are highly inefficient. Overcoming this information conversion and transfer challenge is what the researchers at Osaka University aimed to address.

“The efficiency of converting single photons into single electrons in gallium arsenide quantum dots—common materials in quantum communication research—is currently too low,” explains lead author Rio Fukai. “Accordingly, we designed a nanoantenna—consisting of ultra-small concentric rings of gold—to focus light onto a single quantum dot, resulting in a voltage readout from our device.”

The researchers enhanced photon absorption by a factor of up to 9, compared with not using the nanoantenna. After illuminating a single quantum dot, most of the photogenerated electrons weren’t trapped there, and instead accumulated in impurities or other locations in the device. Nevertheless, these excess electrons gave a minimal voltage readout that was readily distinguished from that generated by the quantum dot electrons, and thus didn’t disrupt the device’s intended readout.

“Theoretical simulations indicate that we can improve the photon absorption by up to a factor of 25,” says senior author Akira Oiwa. “Improving the alignment of the light source and more precisely fabricating the nanoantenna are ongoing research directions in our group.”

These results have important applications. Researchers now have a means of using well-established nano-photonics to advance the prospects of upcoming quantum communication and information networks. By using abstract physics properties such as entanglement and superposition, quantum technology could provide unprecedented information security and data processing in the coming decades.

The article, “Detection of photogenerated single electrons in a lateral quantum dot with a surface plasmon antenna,” was published in Applied Physics Express at DOI: https://doi.org/10.35848/1882-0786/ac336d