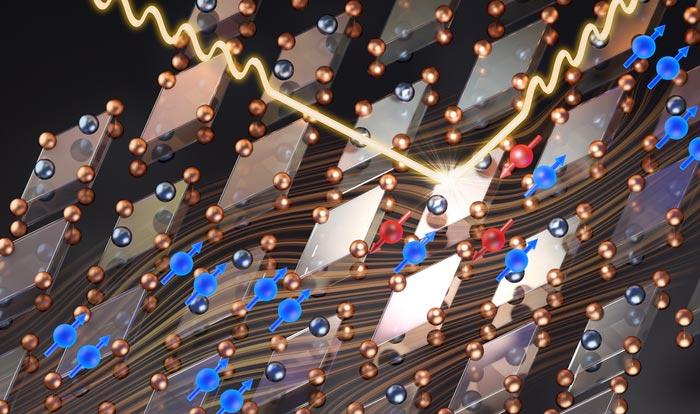 An artist’s impression of a neutron striking a sample of superconducting uranium ditelluride in experiments at Oak Ridge National Laboratory. Crystals of uranium (dark gray) and tellurium (brown) are suspected of hosting spin-triplet superconductivity, a state marked by electron pairs with spins pointed in the same direction (blue). In neutron scattering experiments, incoming neutrons disrupt pairs by flipping one spin in the opposite direction (red), revealing telltale evidence of the pair’s quantum mechanical state.
Credit: Jill Hemman/ORNL

A Rice University-led study is forcing physicists to rethink superconductivity in uranium ditelluride, an A-list material in the worldwide race to create fault-tolerant quantum computers.

Uranium ditelluride crystals are believed to host a rare “spin-triplet” form of superconductivity, but puzzling experimental results published this week in Nature have upended the leading explanation of how the state of matter could arise in the material. Neutron-scattering experiments by physicists from Rice, Oak Ridge National Laboratory, the University of California, San Diego and the National High Magnetic Field Laboratory at Florida State University revealed telltale signs of antiferromagnetic spin fluctuations that were coupled to superconductivity in uranium ditelluride.

Spin-triplet superconductivity has not been observed in a solid-state material, but physicists have long suspected it arises from an ordered state that is ferromagnetic. The race to find spin-triplet materials has heated up in recent years due to their potential for hosting elusive quasiparticles called Majorana fermions that could be used to make error-free quantum computers.

“People have spent billions of dollars trying to search for them,” Rice study co-author Pengcheng Dai said of Majorana fermions, hypothetical quasiparticles that could be used to make topological quantum bits free from the problematic decoherence that plagues qubits in today’s quantum computers.

“The promise is that if you have a spin-triplet superconductor, it can potentially be used to make topological qubits,” said Dai, a professor of physics and astronomy and member of the Rice Quantum Initiative. “You can’t do that with spin-singlet superconductors. So, that’s why people are extremely interested in this.”

Superconductivity happens when electrons form pairs and move as one, like couples spinning across a dance floor. Electrons naturally loathe one another, but their tendency to avoid other electrons can be overcome by their inherent desire for a low-energy existence. If pairing allows electrons to achieve a more sloth-like state than they could achieve on their own — something that’s only possible at extremely cold temperatures — they can be coaxed into pairs.

In the equations of quantum mechanics, these spontaneous ordered arrangements are represented by terms known as order parameters. The name spin triplet refers to the spontaneous breakdown of three symmetries in these ordered arrangements. For example, electrons spin constantly, like tiny bar magnets. One order parameter relates to their spin axis (think north pole), which points up or down. Ferromagnetic order is when all spins point the same direction, and antiferromagnetic order is when they alternate in an up-down, up-down arrangement. In the only confirmed spin-triplet, superfluid helium-3, the order parameter has no fewer than 18 components.

“The problem with uranium ditelluride is the field required to destroy superconductivity is 40 Tesla,” Dai said. “That’s huge. For 40 years, people thought the only possibility for that to occur is that when you put a field on, the spins are already aligned in one direction, meaning it’s a ferromagnet.”

“What the neutron does is come in with a particular energy and momentum, and it can flip the Cooper pair spins from an up-up state to an up-down state,” Dai said. “It tells you how the pairs are formed. From this neutron spin resonance, one can basically determine the electron pairing energy” and other telltale properties of the quantum mechanical wave function that describes the pair, he said.

Si, a study co-author, has spent much of the past five years showing a theory of multiorbital pairing he co-developed with former Ph.D. student Emilian Nica explains contradictory experimental findings in several kinds of unconventional superconductors, including heavy fermions, the class that includes uranium ditelluride.

In multiorbital pairing, electrons in some atomic shells are more likely to form pairs than others. Si recalled thinking that uranium had the potential to contribute paired electrons from any of seven orbitals with 14 possible states.

“Multiorbitals was the first thing that came to mind,” he said. “It wouldn’t be possible if you only had one band or one orbital, but orbitals bring a new dimension to possible unconventional superconductor pairings. They’re like a palette of colors. The colors are the internal quantum numbers, and the f electrons in the uranium-based, heavy-fermion materials are naturally set up to have these colors. They lead to new possibilities that go beyond the ‘periodic table of pairing states.’ One of these new possibilities turns out to be spin-triplet pairing.”

Si is the Harry C. and Olga K. Wiess Professor in Rice’s Department of Physics and Astronomy and director of RCQM. Additional co-authors include Andrey Podlesnyak of Oak Ridge and Yuhang Deng, Camilla Moir and Alexander Breindel of UC San Diego.

https://news-network.rice.edu/news/files/2021/11/1115-SPINTRIPLET-UTe2DOE-lg.jpg
CAPTION: An artist’s impression of a neutron striking a sample of superconducting uranium ditelluride in experiments at Oak Ridge National Laboratory. Crystals of uranium (dark gray) and tellurium (brown) are suspected of hosting spin-triplet superconductivity, a state marked by electron pairs with spins pointed in the same direction (blue). In neutron scattering experiments, incoming neutrons disrupt pairs by flipping one spin in the opposite direction (red), revealing telltale evidence of the pair’s quantum mechanical state. (Credit: Jill Hemman/ORNL)

Located on a 300-acre forested campus in Houston, Rice University is consistently ranked among the nation’s top 20 universities by U.S. News & World Report. Rice has highly respected schools of Architecture, Business, Continuing Studies, Engineering, Humanities, Music, Natural Sciences and Social Sciences and is home to the Baker Institute for Public Policy. With 4,052 undergraduates and 3,484 graduate students, Rice’s undergraduate student-to-faculty ratio is just under 6-to-1. Its residential college system builds close-knit communities and lifelong friendships, just one reason why Rice is ranked No. 1 for lots of race/class interaction and No. 1 for quality of life by the Princeton Review. Rice is also rated as a best value among private universities by Kiplinger’s Personal Finance.