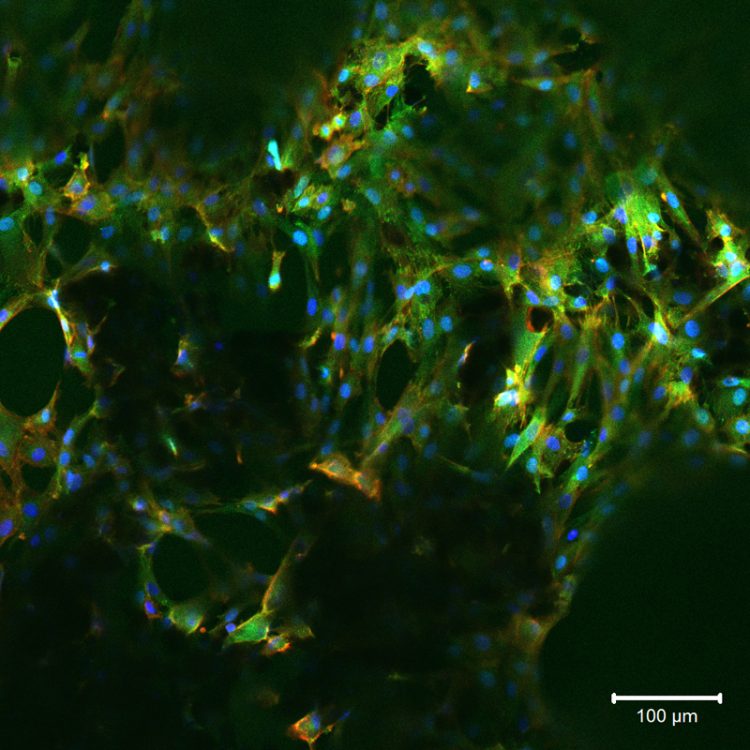 The final meeting of the EU project VascuBone took place on March 30-31, 2015 in the Würzburg Congress Centre. The goal of this project was to improve bone implants depending on the defect, to minimize the risk of rejection while supporting the body’s own regenerative potential, and to promote new bone growth in different bone defects.

The international consortium and invited guests met to evaluate the results of the original and innovative project goals. Nineteen partners from four European countries were involved during the whole funding period.

The greatest innovation in the past five years is the “VascuBoneToolbox,” which provides various components required for a customised bone implant that supports the body’s own self-healing capacity when it cannot meet its own regenerative needs following severe damage or injury.

The toolbox is comprised of three major components. The first component is a novel, diamond-coated ceramic granulate material with large pores. This material can be readily used as it is easily absorbed in defects, is biocompatible and facilitates the growth of bone cells.

“There are drawbacks to both options: metal remains a foreign material on the surface of which new bone cannot form. Tissue from a patient’s pelvis would be ideal but there is a limit to how much can be removed,” explained VascuBone project coordinator Heike Walles.

The biologist is professor of Tissue Engineering and Regenerative Medicine at the Würzburg University Hospital and Director of the Translational Centre “Regenerative Therapies for Oncology and Musculoskeletal Diseases” of the Fraunhofer Institute for Interfacial Engineering and Biotechnology IGB’s Würzburg branch.

The VascuBone researchers were already able to demonstrate in pre-clinical trials that the bone implants from the VascuBone “Toolbox” did not accelerate the growth of tumours. Various tests also showed that the implants were also ideal for regenerating bone that is weakened with age. Clinical trials are now underway that will allow the use of the implants in patients within a few years.

The project partners used the meeting to bring together the scientific findings regarding the implant construction and individual functionalisation with autologous cells and proteins. Quality control measures and imaging that have been implemented and the associated studies and tests were then presented. The relevance of tissue engineering was highlighted both from an industrial perspective and in terms of scientific research.

This research has received funding from the European Union’s Seventh Framework Programme under grant agreement no. 242175.