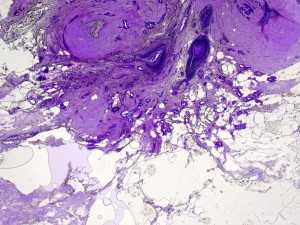 Unique laboratory testing during breast cancer lumpectomies to make sure surgeons remove all cancerous tissue spares patients the need for a repeat lumpectomy in roughly 96 percent of cases at Mayo Clinic in Rochester, a success rate much higher than the rate nationally, a Mayo study shows.

During the years reviewed, 13.2 percent of breast cancer lumpectomy patients nationally had to return to the operating room within a month of their initial surgery, compared to 3.6 percent at Mayo in Rochester, which uses a technique called frozen section analysis to test excised tissue for cancer while  patient are still on the operating table. The findings are published in the journal Surgery.

Frozen section analysis was pioneered at Mayo Clinic more than 100 years ago and is used in a variety of Mayo surgeries.

In breast cancer lumpectomies, surgeons remove tumors with a small amount of normal tissue around them to help ensure they excised all of the cancer. This is known as obtaining “clean” or “negative” margins. During surgery at Mayo in Rochester, that tissue is transferred from the operating room to a nearby pathology lab, where the edges around the lumpectomy are shaved and each sample is frozen and reviewed under a microscope by a pathologist, all within minutes, while the patient is still anesthetized.

The pathologist immediately gives the surgeon the results, so the surgeon knows whether the lumpectomy is complete or there is still cancerous tissue to remove, and at which margin, before the operation concludes.

Mayo Clinic remains one of the only U.S. medical centers to perform frozen section analysis, and its process is unique, including use of a Mayo-modified microtome to freeze tissue so the pathologist can get a 360-degree view around the lumpectomy cavity.

“This intense pathological evaluation with the use of frozen section of the margins while the patient is asleep really drops down the re-excision rate,” says first author Judy Boughey, M.D., a breast surgeon in  the Mayo Clinic Cancer Center. “Achieving negative margins in one operation has a huge impact on the patient’s satisfaction, decreases time away from work, time traveling back and forth to hospital appointments, and the financial cost to the patient, the insurance company and the hospital for a second operation.”