Home / Health and Medicine / Skipping Meat on Occasion May Protect Against Type 2 Diabetes
25.06.2019

Skipping Meat on Occasion May Protect Against Type 2 Diabetes 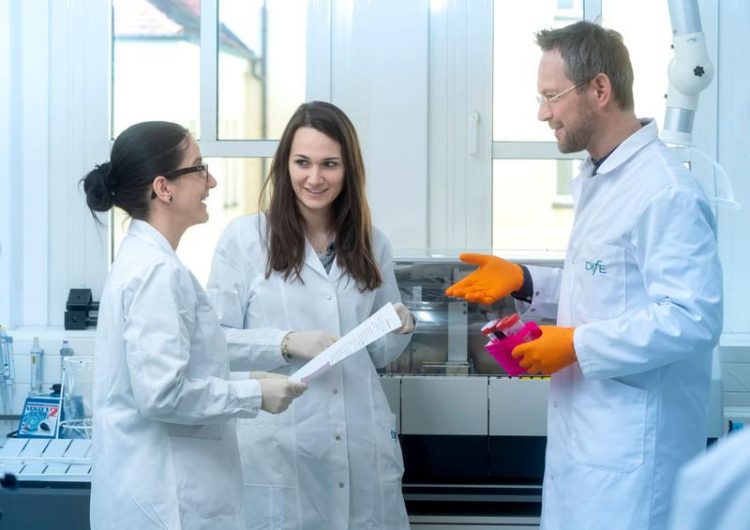 Thomas Laeger with first author Teresa Castaño-Martinez (center) and a technical assistant in the laboratory of the Department of Experimental Diabetology. Photo: David Ausserhofer/DIfE

In earlier studies, the research team of the Department of Experimental Diabetology at the German Institute of Human Nutrition (DIfE) had already discovered that mice fed low-protein chow had improved blood glucose levels and higher energy expenditure than animals fed standard chow.

The results of the current study show that the sole reduction of a single amino acid in the chow has a positive effect on health. A diet with low amounts of methionine improved the glucose metabolism of the mice and their sensitivity to the hormone insulin.

“Interestingly, we observed the beneficial effects of a methionine restricted diet without reducing protein levels and regardless of food intake and body fat,” said Dr. Thomas Laeger, head of the project.

Transferability to humans: fibroblast growth factor 21 and possible advantages of a vegan and vegetarian diet

“Together with colleagues from the Department of Molecular Toxicology and the German Federal Institute for Risk Assessment, we demonstrated that people who eat vegetarian or vegan foods have elevated levels of FGF21 in the blood compared to people who eat an omnivore diet,” said first author Teresa Castaño-Martinez. After only four days of a vegetarian diet, the FGF21 levels also increased in the blood of the people eating an omnivore diet.

“If the results from the animal model are transferable to humans, this would be an important step in the treatment of diabetes. Instead of counting calories and generally abstaining from tasty protein-rich foods, only the methionine content in the food would have to be reduced. It may already be sufficient for those affected to eat vegetarian for a week from time to time and thus increase their FGF21 levels. This could greatly facilitate the acceptance of a change in diet,” said Laeger.

However, it should be noted that certain groups, including children and pregnant and breastfeeding women, have an increased need for methionine.

The scientists agree that the study should be followed up with further research. It would now be important to find out to what extent the reduced methionine uptake actually contributes to the increase in FGF21 levels. In the future, the research team intends to conduct further investigations with vegans in order to uncover additional evidence for the possible involvement of the amino acid methionine in the development of type 2 diabetes.

*Methionine is a sulfur-containing, essential amino acid which the body cannot produce itself and which therefore must be ingested with food. Like all amino acids, it serves as a building block for proteins. Among other things, methionine contributes to the formation of neurotransmitters and hormones and is thus involved in many important body functions. Although certain nuts, oil seeds and vegetables also contain significant amounts of the essential amino acid, a plant-based diet is usually low in methionine compared to a diet with meat and fish.

The DIfE is a member of the Leibniz Association. It investigates the causes of nutrition-associated diseases in order to develop new strategies for prevention, treatment and nutritional recommendations. Its research interests include the causes and consequences of the metabolic syndrome, a combination of obesity, hypertension (high blood pressure), insulin resistance and lipid metabolism disorder, the role of nutrition for healthy aging and the biological bases of food choices and dietary behavior. DIfE is also a partner of the German Center for Diabetes Research (DZD), which has been funded by the German Federal Ministry of Education and Research (BMBF) since 2009.

The German Center for Diabetes Research (DZD) is one of six German Centers of Health Research. It brings together experts in the field of diabetes research and combines basic research, epidemiology and clinical applications. By adopting an innovative, integrative approach to research, the DZD aims to make a substantial contribution to the successful, personalized prevention, diagnosis and treatment of diabetes mellitus. The members of the association are Helmholtz Zentrum München – German Research Center for Environmental Health, the German Diabetes Center Düsseldorf (DDZ), the German Institute of Human Nutrition Potsdam-Rehbruecke (DIfE), the Institute of Diabetes Research and Metabolic Diseases of Helmholtz Zentrum München at the University of Tübingen, and the Paul Langerhans Institute Dresden of Helmholtz Zentrum München at the University Medical Center Carl Gustav Carus of TU Dresden, associated partners at the universities in Heidelberg, Cologne, Leipzig, Lübeck and Munich, and other project partners.