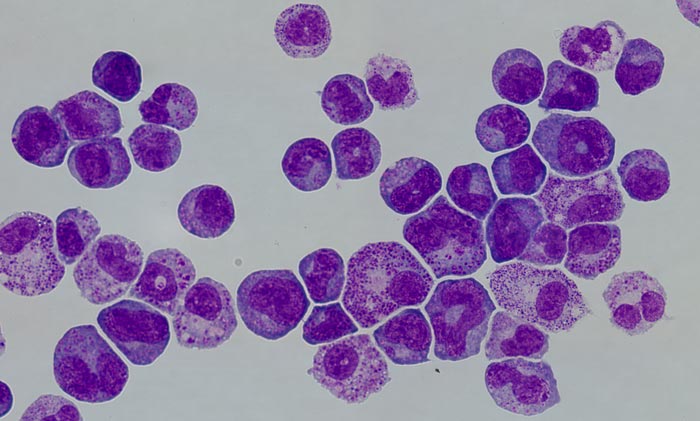 A new study published today in the journal Genes & Development reveals a gene that normally suppresses the formation of tumours but is reprogrammed at the onset of acute promyelocytic leukaemia (APL), an aggressive type of blood cancer that is responsible for 5-15% of all types of leukaemia.

The findings pave the way for the development of drugs that boost the expression of the gene at the earliest stages of cancer formation, intercepting the disease before it becomes uncontrollable.

APL occurs because of chromosomal translocations, in which a chromosome breaks and a portion of it reattaches to a different chromosome. In APL, this results in a gene fusion event between the promyelocytic leukemia (PML) and retinoic acid receptor alpha (RARα) genes. Previously healthy stem cells begin to express a new protein – PML/RARα – which blocks their differentiation. Eventually, the bone marrow fills up with abnormal white blood cells known as promyelocytes that lead to a shortage of other types of blood cells and prevent normal blood production.

Treatments for APL include drugs such as all-trans-retinoic acid (ATRA), which result in 90% of cases entering remission. However, new avenues of therapy are still required for patients that do not respond to this treatment, as well as for the large proportion of patients that relapse after few years.

Despite the importance of chromosomal translocations in initiating the disease, little is known about how PML-RARα changes the genomic architecture of cells.  Researchers at the Centre for Genomic Regulation (CRG) and the Centro Nacional de Análisis Genómico (CNAG-CRG) in Barcelona, and the European Institute of Oncology in Milan, used mouse models that closely mimic the progression of APL in humans to study changes in cells during the onset and progression of the disease.

They found that PML-RARα initiates a series of alterations that result in changes to the structural support of chromosomes and the repression of transcription, as well as changes in chromosomal compartments that ‘open’ or ‘close’ access to particular regions of the genome.

One of the genes most affected by these changes at an early stage was KLF4, which codes for a protein that binds to DNA to control the rate of transcription of genetic information, also known as a transcription factor. KLF4 activity was inactivated during the progression of APL. The researchers found that, when cells were manipulated to overexpress KLF4, it suppressed the self-renewal traits of cancerous cells and reversed the effects caused by the actions of PML-RARα.

“Overexpression of KLF4 acts as a tumour suppressor in acute promyelocytic leukaemia. Our finding opens a new avenue of treatment to target this aggressive disease alongside existing treatments. In follow up studies, we have observed that combination of ATRA with KLF4 overexpression can suppress the cancerous traits mediated by PML-RARa, suggesting a potential therapy for non-responsive or relapsed patients that could be spun off from this work”, says Glòria Mas Martin, first author of the study and previously a postdoctoral researcher at the CRG.

The method, developed in Luciano Di Croce’s laboratory at the CRG, can also be used to study changes to the genomic architecture of other types of cancer, which according to the authors, could reveal other possible therapeutic targets yet to be discovered. “The steps that initiate cancer are the most interesting because they are the equivalent of the snowball that turns into an avalanche. This approach could be used to understand the very first effects of other oncogenic proteins that act as transcriptional repressor, leading to the development of new therapies that target a mechanism before it spirals out of control,” says ICREA Research Professor Luciano Di Croce, senior author of the study and researcher at the CRG.