Home / Health and Medicine / Researchers have identified areas of the retina that change in mild Alzheimer's disease
16.09.2019 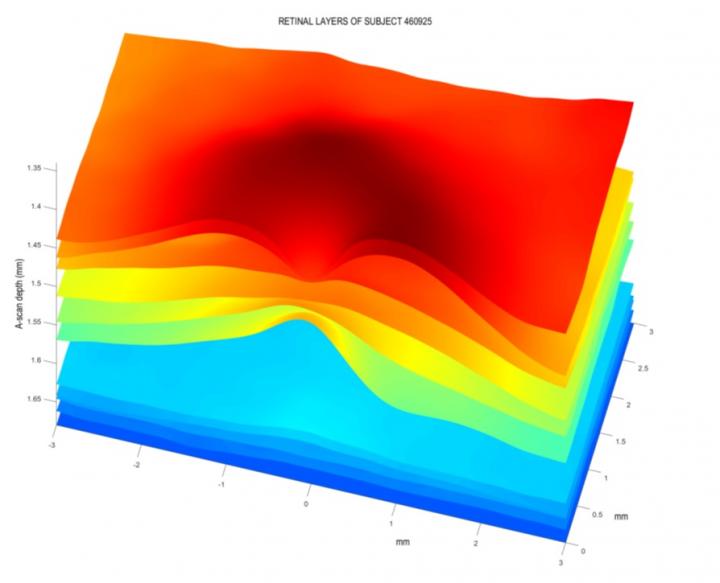 Retinal layers in one of the patients participating in the study. Credit: Knowledge Technology Institute, UCM

For the first time, researchers have determined the shape and size of the areas that present significant thinning in each retinal layer, which tend to occur in the same locations.

“The novelty of our results is that in the early stage of the disease represented by our patient sample, neural layer thinning systematically predominated over thickening, as regards both percentage of thinned surface and neural volume lost”, announced Luis Jáñez, a researcher at the Knowledge Technology Institute at the Complutense University of Madrid and first author of the study.

The results of this investigation, which have recently been published in Scientific Reports, confirm that due to the retina's features in common with the brain and accessibility using non-invasive techniques, it constitutes one of the most important and promising biomarkers for further study of this complex neurodegenerative disease.

“In recent years, ground-breaking studies have used the eyes as a window onto the brain to detect the changes that occur during the early stages and progression of Alzheimer's disease”, explained Elena Salobrar-García, a scientist at the Ramon Castroviejo Ophthalmology Research Institute at the Complutense University of Madrid and co-author of the study.

The macular zone is the first to present changes

Researchers at the Knowledge Technology Institute and the Ramon Castroviejo Ophthalmology Research Institute –both at the Complutense University– have developed new techniques and analytical tools that have enabled them to confirm that “the first changes appear in the macular zone, which is the most sensitive area and controls central vision and colour perception”, noted José Manuel Ramírez, director of the Ramon Castroviejo Institute.

The study was conducted with a group of 19 patients selected from 2124 clinical histories at the San Carlos Hospital Clinic Geriatric Service in Madrid. These patients had very early stage Alzheimer's disease and did not present any other disease that affected the retina. The study also included a control group comprising 24 volunteers similar in age and other characteristics but without any relevant disease.

A three-dimensional image of a square region measuring 6×6 mm was obtained for each participant's retina, using optical coherence tomography (OCT). “With OCT, a light beam can sweep this area of the retina in 2.5 seconds. This frequently used technique is non-invasive, very fast and low-cost”, Salobrar indicated.

Afterwards, using software designed specifically for this study, the thickness of each retinal layer was measured at 262,144 points distributed over a grid of 512 columns and as many rows. “Using statistical techniques based on Gaussian random field theory, we determined for the first time the exact shape, size and location of the areas affected by the disease in each retinal layer”, added Jáñez.

In order to compare changes in thickness in different layers, the researchers developed software capable of performing exact arithmetic operations with the huge whole numbers generated by combining the hundreds of thousands of points sampled in each layer.

“The results of our study represent a breakthrough for the diagnosis and follow-up of Alzheimer's disease and confirm that the retina is a good biomarker”, the researchers concluded.