Home / Health and Medicine / Researchers find speedometer in the brain
05.06.2015

Researchers find speedometer in the brain 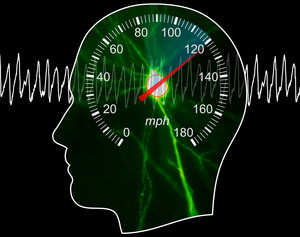 Researchers in Bonn have identified neural circuits in the brains of mice that are pivotal for movement and navigation in space. These nerve cells that are presumed to exist in a similar form in humans, give the start signal for locomotion and also supply the brain with speed-related information. Source: DZNE / Falko Fuhrmann

Researchers in Bonn have identified neural circuits in the brains of mice that are pivotal for movement and navigation in space. These nerve cells that are presumed to exist in a similar form in humans, give the start signal for locomotion and also supply the brain with speed-related information.

Scientists at the German Center for Neurodegenerative Diseases (DZNE) and the University of Bonn led by Prof. Stefan Remy report on this in the journal “Neuron”. Their investigations give new insights into the workings of spatial memory. Furthermore, they could also help improve our understanding of movement related symptoms associated with Parkinson’s disease.

In a familiar environment our movements are purposeful. For example, if we leave our office desk for a coffee break, we naturally follow a predefined route that has been stored in our memory: Through the office door, left into the hall, past the windows. To keep us on track, our brain has to process varying sensory impressions quickly. “This is a fundamental issue our brain has to deal with.

Not just on our way to the coffee machine, but any time we move in space. For example when we are on a bike or in a car,” explains Remy. With increasing speed, the data rate also increases, he emphasizes: “The faster we move, the less time the brain has to take in environmental cues and to associate them with a location on our memorized spatial map. Our perception therefore has to keep pace with the speed of movement so that we remember the right way to go. Otherwise we end up at the copy machine instead of the coffee machine.”

It has been known for some time that the hippocampus – the part of the brain that controls memory, particularly spatial memory – adjusts to the speed of locomotion. “The electrical activity of the hippocampus undergoes rhythmic fluctuations. The faster we move, the faster certain nerve cells are activated,” says Remy. “This increased activation rate sensitizes the brain. It becomes more receptive to the changing sensory impressions that have to be processed when moving.”

But how does the brain actually know how fast a movement is? Previously there was no answer to this question. Now, Remy and his colleagues have decoded the mechanism. For this, they stimulated specific areas within the mouse brain and recorded the ensuing brain activity and the mice’s locomotion. “We have identified the neural circuits in mice that link their spatial memory to the speed of their movement. This interplay is an important foundation for a functioning spatial memory,” says Remy. “We assume that humans have similar nerve cells, as the brains of mice and humans have a very similar structure in these regions.”

The cells in question are located in the “medial septum”, a part of the brain directly connected to the hippocampus. They make up a relatively small group comprising a few thousand cells. “They gather information from sensory and locomotor systems, determine the speed of movement and transmit this information to the hippocampus. In this way, they tune the spatial memory systems for optimized processing of sensory stimuli during locomotion,” explains Remy. However, these circuits have even more functions. “We have found that they also give the start signal for locomotion and that they actively control its speed. Until now, this control function was almost exclusively ascribed to the motor cerebral cortex.”

These newly discovered nerve cells are linked with areas of the brain that are affected by Parkinson’s in humans. This disease is associated with movement-related symptoms and can cause dementia. “In this respect, our results go beyond the workings of spatial memory; they also have the potential to provide new insights into how memory systems and the execution of movements are affected in Parkinson’s disease,” says Remy.

The German Center for Neurodegenerative Diseases (DZNE) investigates the causes of diseases of the nervous system and develops strategies for prevention, treatment and care. It is an institution of the Helmholtz Association of German Research Centres with sites in Berlin, Bonn, Dresden, Göttingen, Magdeburg, Munich, Rostock/Greifswald, Tübingen and Witten. The DZNE cooperates closely with universities, their clinics and other research facilities.