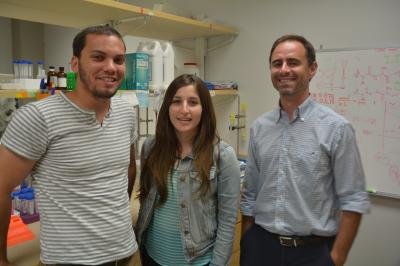 The finding, published in this month's Nature Methods, is expected to be easily adopted for use in medical research to find cures and treatments for a wide range of diseases, according to the team's lead scientist, Dr. Jean-Philippe Pellois, an associate professor of biochemistry at Texas A&M University.

“This is something that for many years people have tried to do, because proteins are basic components of the cell. They are the molecules that are doing all kinds of jobs inside the cell,” Pellois said. “Being able to deliver a protein to change or study what the cell is doing is extremely useful.”

Currently, scientists use different methods to try to figure out how molecules work inside a cell. In general, a scientist can deliver the DNA that codes for the protein into a cell, but that requires crossing the cell membrane, which damages or kills the cell, he explained. Also, the amount of protein produced by DNA expression is hard to control, and the DNA introduced can also alter the genome of cells in an uncontrollable and unpredictable manner.

“We bypass this and deliver the protein directly,” Pellois said. “And the method we found delivers the protein very efficiently. A lot of the protein gets inside the cell, and we don't damage the membrane or alter the physiology of the cell.

“That's really powerful. It has an impact for cell biology, whether the question is how does the cell work and what do proteins do, or when a protein does not function properly, how does this lead to disease?”

Human cancer cells into which a protein with a green signal is delivered. (Texas A&M AgriLife Research photo courtesy of Dr. Jean-Philippe Pellois)

Human cancer cells into which a protein with a green signal was delivered. (Texas A&M AgriLife Research photo courtesy of Dr. Jean-Philippe Pellois)

He said the field of regenerative medicine could be one of the first practical applications because research there aims at reprogramming cells – for example,using a patient's skin cells reprogrammed asheart or liver cells to help that person recover from an illness.

“You can use those cells as therapeutic tools themselves that can repair damaged organs and tissues,” Pellois said. “Our finding will allow these therapeutic challenges to be met by helping medical researchers get the reprogramming proteins inside cells safely.”

Similarly, the method could be used in the battle against cancer, he added.

“A way to kill a cancer cell is to deliver a protein that is known to be a tumor suppressor,” he said. “Sometime cancer arises when a certain set of key proteins called tumor suppressors stop functioning. When they function normally, they make sure that healthy cells don't start proliferating. But when there is a mutation in DNA that leads to a loss of function of those tumor suppressor proteins, that is when a cell can start going completely crazy and growing without limits.

Drug development to treat specific ailments where a medicinal compound could be delivered into a cell is another potential use, he said.

His team derived the method from decades old knowledge of research on the HIV virus, which found a toxic protein that was able to go from one infected cell to an uninfected cell. Peptides derived from that protein have been studied for their ability to penetrate cells.

“Our contribution has been to take those compounds that work at very low efficiency and all of a sudden increase their efficiency dramatically. It took a clever guess and also luck to find the compounds that worked really, really well,” he said of his team at Texas A&M which included Alfredo Erazo-Oliveras, Kristina Najjar, Laila Dayani, Ting-Yi Wang and Gregory Johnson.

He likened the discovery to “creating a Trojan horse for the cell.”

“We are able to hijack the cell, and then use the cellchemistry to get those reagents to come out of what would be the equivalent of a Trojan horse,” he said. “It is a little bit like kicking through the door. Usually, in kicking to get inside the cell the door is damaged.

“Because of that, it's a gamble. A lot of people were hesitant to make those reagents more effective because of the danger of what can happen to the cell. In other words, yes, you may get in the cell, but if you destroy the membrane and kill the cell, what good is that?

“The surprise in our work is that despite being extremely efficient, despite presumably 'kicking through the door' and getting inside, the cell is okay,” he said. “We don't quite know why, but what we suspect is that the cell is basically repairing the door as soon as it is broken. Perhaps the cell has a mechanism to repair itself, and we were lucky to stumble upon that to develop a technology that is both efficient and safe.”

His team used “a library of cells” from people, chicken, monkeys and mice. There are slight differences, but more among different types of cells than by species. Some types — such as brain cells — are a bit more resistant, but the method still worked, he said.

“Now it is a question of fine tuning,” Pellois said. “This delivery technology provides us a way to turn the cell into a test tube where we can add components, control how much we add and then look at what happens. That will allow us to study functions in mechanisms and in ways that have not been possible before.”

How microglia contribute to Alzheimer’s disease