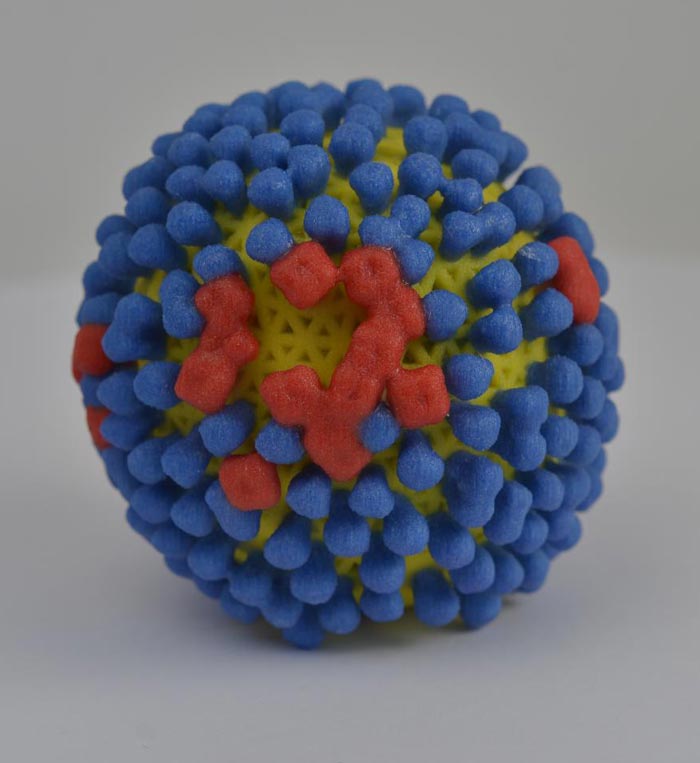 This is a 3-D print of influenza virus. The virus surface (yellow) is covered with proteins called hemagglutinin (blue) and neuraminidase (red). Credit: NIH

The new research builds on previous studies of NA and was conducted by a team of scientists including investigators from the Centers of Excellence for Influenza Research and Surveillance (CEIRS) program, which is organized and funded by the National Institute of Allergy and Infectious Diseases (NIAID), part of the National Institutes of Health.

Investigators analyzed blood samples from people vaccinated against influenza and people diagnosed with either the 2009 H1N1 influenza virus or H3N2 influenza viruses. The volunteers were recruited for this study or had taken part in prior influenza research studies.

The authors note that the findings suggest that influenza vaccines should be optimized to better target NA for broad protection against diverse influenza strains. In this regard, NIAID is supporting research to characterize NA responses in infected and vaccinated individuals and to determine the mechanism of action of NA protection. NIAID also supports “NAction!” a CEIRS working group that identifies knowledge gaps in our understanding of NA and sets NA research priorities for improved influenza vaccines. These efforts contribute to NIAID's larger plan to develop a universal influenza vaccine–a vaccine that can durably protect all age groups against multiple influenza virus strains.

Marciela DeGrace, Ph.D., project officer, Centers of Excellence for Influenza Research and Surveillance part of NIAID's Division of Microbiology and Infectious Diseases, is available for comment.