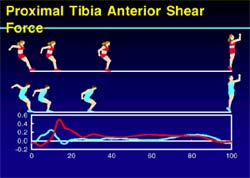 Women don’t bend as much as men do when they land a jump.

Scientists make strides in the study of women’s sports injuries.

Straighter legs and knock-knees may be causing female athletes to tear knee ligaments more frequently than males. The finding could help coaches to shape women’s training to reduce such injuries.

When researchers at the University of North Carolina spotted that women land with their knees straighter and closer together than do men, they asked the athletes to spring on and off platforms that measure force in several directions. This revealed that women also put more twisting force on their knees1.

Sudden twisting or excess pressure at a knee joint can stretch or tear the anterior cruciate ligament, or ACL, which connects the thigh bone to the shin bone. Often accompanied by a sickening pop, ACL injuries are nearly eight times more common in women than men in sports such as basketball, soccer or volleyball.

Women may put more force on their knees because they tend to use their quadriceps, rather than their hamstrings, to jump and turn. Training female athletes to decelerate using their leg muscles differently and to bend more at the knees when they land could prevent many ACL injuries.

G. Guerrieri women’s soccer coach at Texas A&M University, certainly thinks so. “In the autumn 2000 season, we had six ACL injuries. In the spring of 2001, we had zero,” says Guerrieri. In the interim the team participated in a pilot biomechanics-based injury-prevention program inspired by earlier work from the University of North Carolina team.

Previous studies of knee injuries in women have focused on physical variables, such as ligament size or menstrual cycle. As Bing Yu, one of the UNC scientists, explains, “most people were unaware of motor control as a problem that brings women closer to the point of injury”.

Hormones and anatomical differences certainly contribute to injury risk. But, as sports injury researcher Julie Gilchrist of the Centers for Disease Control and Prevention in Atlanta, Georgia points out, “you can’t pull a player from the game because she’s getting her period”. You can, however, train her to move safely.