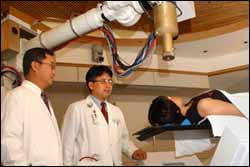 Thirty-one-year-old Karen Romero, blinded by a malignant brain tumor, had endured two years of chemotherapy before her cancer was finally eradicated at UT Southwestern Medical Center at Dallas with a new means of delivering radiation therapy.

She believes – as do her doctors – that the treatment she received, which pinpoints high-beam radiation therapy on cancer cells with unprecedented accuracy, saved her life. After only two treatments, her ocular germinoma tumor appears to be gone.

The device used to deliver the radiation, called the Accuray CyberKnife, is in use at only a handful of medical centers in the United States. UT Southwestern doctors are hoping to expand its scope. They are seeking patients whose cancer has spread, or metastasized, to the liver to participate in a new series of clinical trials.

“I think this kind of treatment was very beneficial for me because of its effectiveness and a lack of side effects,” said Ms. Romero of Garland. “For example, I did not have any hair loss as I did with conventional chemotherapy, and there was less recuperation time and fatigue.”

Dr. Lawrence Chinsoo Cho, associate professor of radiation oncology at UT Southwestern, said the Accuray targets within a millimeter of cancerous cells while leaving surrounding healthy tissue unharmed. Instead of standard chemotherapy or conventional stereotactic radiosurgery systems that require rigid skeletal immobilization and have limited maneuverability, the Accuray employs a linear accelerator on a robotic arm to locate the position of the tumor and to focus beams of radiation on it. It compensates for body movement by keeping the beams focused precisely on the tumor.

“We have plenty of experience with the device, having used it for tumors of the brain, head and neck, base of the skull, cervical spine, pancreas and prostate,” said Dr. Hak Choy, chairman of radiation oncology. “We’re continually finding new uses for the Accuray because of its various unique capabilities.”

The device is cleared by the Food and Drug Administration for radiosurgery for lesions anywhere in the body when radiation treatment is needed.

“We’re tackling fights that were not possible to tackle before the advent of this technology,” said Dr. Cho, principal investigator for the new clinical trial. “We are going after tumors we have not treated routinely, and instead of going to the operating room and the recovery room, this can be done as an outpatient procedure.”

Approximately 40 patients are needed for the initial phase of the trial, which is expected to last for a year to 18 months and is designed to find the right treatment dose and assess toxicity. Participant responses to treatment will be determined by positron emission tomography scans prior to and about two months after the last treatment. There will be three Accuray treatments over a seven- to 10-day period, with each procedure taking a couple of hours on an outpatient basis.

The second phase of the clinical trial will enroll another 30 metastasized liver cancer patients to evaluate the overall response and efficacy of the Accuray, said Dr. Cho.

Pre- and postoperative procedures will be conducted at the Moncrief Radiation Oncology Center and the Accuray treatments themselves will take place at Zale Lipshy University Hospital – both UT Southwestern facilities. Patients will have an initial consultation with Dr. Cho and the other doctors in the clinical trial team and undergo a computed tomography scan to construct a 3-D image of the tumor and develop a customized treatment plan.

Tiny seeds will be permanently placed in the abdomen region to define the areas of treatment. The Accuray’s image-guidance system uses the seeds to precisely localize and track the spatial position of the liver at the start of and throughout each radiation treatment.

As for Ms. Romero, mother of 5-year-old Isaac, “I wouldn’t be alive today if it weren’t for the Accuray – and the UT Southwestern doctors. They quite simply saved my life.”