Home / Health and Medicine / New Breast Cancer Drug Shrinks Tumors or Slows Growth in Up to Half of Women
07.06.2004 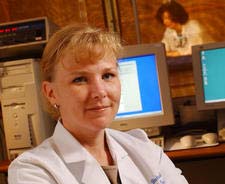 A new and experimental breast cancer drug called lapatinib inhibited tumor growth in nearly half of women who took it for eight weeks in a national Phase I clinical trial, according to results of a study being presented at the annual American Society of Clinical Oncology meeting in New Orleans.

Kimberly Blackwell, M.D., an oncologist from the Duke Comprehensive Cancer Center, presented data showing that 46 percent of breast cancer patients who took the oral drug for eight weeks had stable disease or tumor shrinkage. Approximately 24 percent of patients who took the drug for four months had stable disease or tumor shrinkage.

The results are quite encouraging, said Blackwell, because lapatinib is one of the first drugs to elicit a response in women whose tumors did not respond to at least two traditional therapies, including trastuzumab (Herceptin).

Trastuzumab is the front-line drug used to treat women whose tumors overproduce a growth-regulating protein called Her-2. Trastuzumab blocks the Her-2 receptor on cancer cells and inhibits its signaling, thereby shrinking or stabilizing the tumor.

But nearly one-third of tumors with Her-2 over-expression do not respond to trastuzumab, said Blackwell. In the current trial, the majority of patients — 59 percent — had progressed through three, four or five traditional cancer drugs.

Lapatinib represents a new type of therapy because it targets Her-2 plus another growth factor protein called Epidermal Growth Factor (EGFR). “Blocking the action of two growth factors has a more profound effect on inhibiting cell growth than blocking a single growth factor, and we think this dual action on breast cancer cells is responsible for the positive effects we’re seeing,” said Blackwell. The study was funded by GlaxoSmithKline, the maker of lapatinib.

The study showed that lapatinib was safe and had minimal side effects, because it targets only these two very specific receptor sites on breast cancer cells, said Blackwell. Five percent of women experienced a rash, 5 percent had fatigue, and 10 percent had diarrhea. In contrast, chemotherapy can cause debilitating nausea, anemia, fatigue and the potential for heart and liver damage.

The trial is continuing to recruit patients at Duke and other sites around the country.