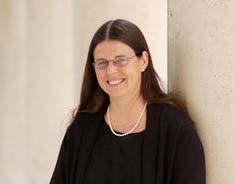 Long before a woman feels an ominous lump in her breast, Victoria Seewaldt, M.D., can test her for subtle signs that breast cancer may be brewing in a few errant cells amidst thousands of healthy ones. Never before has such a possibility existed, and Seewaldt is brimming with excitement.

“This is potentially the ’breast pap smear’ that we never had before,” said Seewaldt, a scientist and breast oncologist at the Duke Comprehensive Cancer Center. “Just as we do with a cervical pap smear, we can now survey cells from the whole breast, examine them under the microscope and test for early changes that often precede breast cancer. Then we can give women a preventive agent to see if we can eradicate her abnormal cells and thus prevent cancer from developing.”

The new test, developed at University of Kansas Medical Center and refined at the Duke Comprehensive Cancer Center, will be undergoing clinical trials at three centers nationwide. It is far more sensitive than a mammogram because a pathologist analyzes each cell for specific molecular changes that are common to many breast cancers, said Seewaldt, director of Duke’s new Breast Health Clinic. It is especially useful for detecting changes in dense breasts, which are typically quite difficult to image using mammography.

In the test, physicians use a slender needle to extract cells from segments of the entire breast. Doctors then test each breast cell for specific genetic changes, as well as for abnormally shaped cells that are deemed “atypical.”

Carol Fabian, M.D., at the University of Kansas Medical Center, has shown that even a smattering of atypical cells confers a four-fold increase in a woman’s risk of breast cancer. And many scientists have linked specific gene alterations with the development of breast cancer. But further than that, scientists are unclear as to how breast cancers arise.

The new “breast pap smear” will help characterize a cell as it transforms from normal to abnormal, and then eventually into a malignant cell, said Seewaldt. Understanding how cells behave very early in the process of becoming cancerous can help doctors assess a woman’s potential cancer risk — and hopefully even prevent cancer — long before cellular changes have become irreversible, she said.

“Ninety percent of breast cancers occur randomly, without a family history of the disease or a known genetic mutation in the woman, said Seewaldt. “Clearly, we don’t understand how most breast cancers arise, and we don’t know how the various agents we give to patients actually repair what is malfunctioning.

“The new test will define what early changes in the breast looks like, and furthermore, it will tell a woman early on if a preventive treatment is really working in her own body.”

In particular, the test will detect the presence or absence of a specific gene called RAR beta. This gene regulates how breast cells use vitamin A in order to maintain their proper health. Studies have shown that RAR beta loses its ability to function in many women with breast cancer.

If RAR beta is present inside cells, vitamin A can do its job: regulating how breast epithelial cells grow, divide and eventually die at the appropriate time. Without RAR beta, vitamin A doesn’t work and breast epithelial cells embark on the road toward cancer. Hence, RAR beta is a good molecular “marker” by which to assess the potential risk of developing breast cancer.

Even a few breast epithelial cells that show loss of RAR beta function could signal an increased risk for breast cancer, said Seewaldt. A few abnormal cells likely reside in a field of many abnormal cells. Thus, a woman who shows even a sprinkling of cells without RAR beta will be given a preventive agent such as beta-carotene, flax seed oil, tamoxifen or a COX 2 inhibitor to determine if one of these agents can eradicate the abnormal cells.

“RAR beta gives us a potential marker to monitor if the preventive agents we’re giving have an impact on preventing breast cancer,” said Seewaldt. “We’ll test the women before, during and after treatment to see if any of the various agents are able to reduce the number of abnormal cells.”

Women aged 35 to 55 who are at high risk for breast cancer are eligible to join the clinical trial. High risk is defined as having two first degree relatives who had breast cancer; an abnormal breast biopsy or mammogram or a carrier of BRCA 1 or 2 — genes that confer a 90 percent lifetime risk of breast cancer.

Despite these criteria, Seewaldt cautions that there is no definitive way to measure risk without a test because the majority of breast cancers develop at random.

“As women in America, we are all at risk for breast cancer,” said Seewaldt. “Mammograms and self breast exams are good tests for looking at cancer, but they don’t always do a good job of finding early changes in the breast.”

While the test is only available at three clinical sites (Duke, Kansas and Arthur G. James Cancer Hospital and Richard J. Solove Research Institute at The Ohio State University) as part of a clinical trial, Seewaldt hopes it will ultimately be available at numerous sites around the country. The test is cheap and so simple to administer and analyze that even a basic clinical laboratory could carry it out, she added. It requires only a syringe and pap smear fluid — no refrigeration or special preservation — and a simple “PCR” test to amplify genes that even a high school student could perform in the laboratory.

The test works as follows: the breast is first numbed with a local anesthetic, a slender needle is inserted into the inner quadrant of the breast, then it is slightly withdrawn and reinserted eight to 10 times in precisely defined segments of the breast. The process, called random fine needle aspiration, is repeated on the breast’s outer quadrant to ensure that cells are extracted from the entire breast.

The samples of breast tissue are analyzed for signs of atypia, including a critical alteration to RAR beta in which the gene is silenced by methylation. Methylation is thought to be triggered by environmental factors such as diet, nutrition, smoking and chemical exposures. These environmental triggers prompt a group of molecules to attach to a gene and convey a message to silence or reduce its expression. The gene itself remains unchanged, which is why scientists can’t search for a mutation in the gene.

Seewaldt describes methylation as like putting gum on a light switch. The light isn’t broken, but it can’t be switched on.

When RAR beta isn’t turned on, it can’t signal two other important tumor suppressor genes — CBP and p300 — which are also critical in regulating how a cell grows.

One key to reversing the methylation of RAR beta could lie in vitamin A and substances similar to vitamin A, said Seewaldt. Her recent studies have shown that vitamin A can actually demethylate RAR beta. In doing so, vitamin A initiates an important feedback loop that suppresses tumor growth in this way:

Seewaldt likens the process to a relay race. If one first runner doesn’t connect with the next runner, the entire loop is broken.

“We’ve always known that vitamins are important in the prevention of cancer, but here is a clear-cut example at the cellular level demonstrating that normal amounts of fresh vegetables — leafy greens, carrots, sweet potatoes — may be very important in preventing breast cancer.”

“What cellular changes promote the growth of breast cancer, and which agents can halt that progression? These are the questions we hope to answer.”