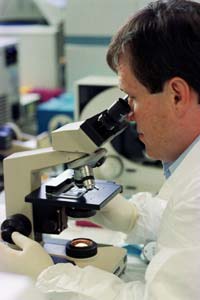 David Watkins, researcher with the Medical School and the Wisconsin Regional Primate Research Center, studies SIV viral infection at a microscope in his research lab. Photo by: Jeff Miller

MADISON-Mutations that allow AIDS viruses to escape detection by the immune system may also hinder the viruses’ ability to grow after transmission to new hosts, scientists at the University of Wisconsin-Madison announced this week in the journal Nature Medicine.

The discovery may help researchers design vaccines that exploit the notorious mutability of HIV by training the immune system to attack the virus where it’s most vulnerable. The work appears alongside a study of HIV-infected people performed by scientists at Harvard Medical School and Oxford University. The Wisconsin study’s lead author, Thomas Friedrich, is a doctoral student working under the direction of David Watkins, professor of pathology at UW-Madison and senior scientist at the Wisconsin National Primate Research Center.

Watkins’ team produced an “escaped” AIDS virus that mimicked events that occur in HIV infection when the virus mutates to become unrecognizable to killer cells known as cytotoxic T-lymphocytes, or CTL. The researchers found that the mutant virus did not grow as well as the original strain. The mutations, while allowing the virus to escape immune recognition, had also weakened the virus. To model the transmission of escaped viruses between people, the team inoculated monkeys with the mutant virus strain. They discovered that most of the escape mutations were lost as the virus grew in the monkeys, often restoring original sequences that killer cells could recognize.

Some scientists have theorized that HIV could adapt to the human immune system as the AIDS epidemic develops, becoming less and less recognizable. Watkins said that his group’s findings should help allay these fears.

The UW-Madison group has been studying immunity to AIDS viruses since the early 1990s. Most recently, the researchers have been studying the ways in which viruses mutate to “escape” recognition by the body’s killer cells. Killer cells are white blood cells that perform immune “surveillance” throughout the body, detecting infected cells and eliminating them before the virus can spread.

“Over 40 million people are now infected with HIV worldwide, and a vaccine is urgently needed,” Watkins said. “We hope that our findings can be used to help design vaccines that show killer cells how to fight the virus most effectively.”

Jordana Lenon U of Wisconsin-Madison