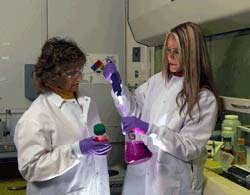 Cecilia Williams (left) and Jill Bieker, two members of the Sandia/K-State research team, inject Sandia’s decontamination formulation into a flask containing a surrogate of the SARS virus. The team has demonstrated the formulation’s ability to inactivate Bovine coronavirus, the internationally accepted surrogate for the SARS virus, in less than a minute. (Photo by Bill Doty)

In a series of tests conducted at Kansas State on Bovine coronavirus (BCV), the internationally accepted surrogate for the SARS coronavirus, Sandia-modified versions of its DF-200 formulation fully inactivated BCV samples in one minute or less.

The team now is pursuing funding to conduct similar tests on the SARS coronavirus and hopes to test other emerging viruses such as the avian influenza virus (bird flu).

Recent research suggests that the SARS virus can remain active on contaminated surfaces for days, and health officials speculate that places where infected people congregate, such as airports and hospital wards, might have served as “superspreaders” during the SARS outbreak.

The Sandia/K-State researchers believe that cleaning facilities with chemicals proven to inactivate the virus might significantly blunt an outbreak and possibly prevent regional epidemics from becoming worldwide epidemics.

The Sandia decontamination formulations are designed to be less harsh and easier to use than other chemicals currently used for decontamination of biological agents. Tailored formulations have been under development at Sandia for military and homeland security uses since 1996.

In 2001 the earliest version of the commercially licensed foam were among products used in cleanup efforts at facilities contaminated with anthrax in New York and Washington, D.C.

To give the researchers enough scientific confidence that the formulation would reliably stamp out SARS regardless of the circumstances, the Sandia/K-State team tested the formulations against BCV using cell culture methods with and without organic material present. Organic materials such as soil and feces may improve the survival rate of coronaviruses and can react directly with the disinfectant to make it less effective.

“We didn’t want to test the formulations in the best-case scenario,” says Cecelia Williams of Sandia. “We wanted the worst-case scenario to provide a margin of certainty that this would inactivate the SARS-causing virus under real-world conditions.”

The lower concentration makes the formulation, already much less corrosive and toxic than other decontamination products such as bleach or ammonia, even more benign, she says.

Currently no disinfectant products are registered with the Environmental Protection Agency (EPA) specifically for killing the SARS virus on surfaces.

Two commercially available versions of the Sandia formulation also were effective in inactivating the virus in the tests, she says.

A second significant outcome of the joint research is a set of protocols and a methodology to verify viral inactivation. A SARS workshop in October 2003 sponsored by the World Health Organization identified the standardization of test protocols as one urgent need in responding to future SARS outbreaks.

Currently very little information is available in the scientific literature regarding chemical inactivation of viruses, says team member Jill Bieker, a Sandia intern currently working on a PhD at K-State. The work at K-State was conducted under the guidance of Dr. Sanjay Kapil, a world-renowned coronavirus expert.

As part of the project, Sandia conducted experiments to develop methods of applying the formulation and to determine how inactivation can be measured and verified. The team also modified common laboratory diagnostic tools and assay techniques to test the foam’s efficacy against BCV. The work built on previous efficacy studies on chem-bio agents Sandia had performed for DOE, the military, and the U.S. Department of Homeland Security.

“The protocols developed for this project could be rapidly modified to help provide health officials and researchers around to world with a method of verifying viral inactivation,” says Bieker. “It would allow officials to respond more quickly to future disease outbreaks and to quickly identify the disinfection products that work best against a particular virus.”

SARS and other viruses

Last winter, spring, and summer, SARS coronavirus infected nearly 8,900 people in 30 countries and caused 774 deaths. Whether a SARS materializes this year on a broad scale remains to be seen. Only a few cases have been confirmed so far in Asia.

The researchers are optimistic that the Sandia formulations could become an effective means of minimizing the spread of returning viruses such as SARS and the Norwalk (cruise ship) virus, emerging infectious diseases such as avian influenza (bird flu), and more common viruses such as influenza.

“Flu and other viruses have similarities that give us reason to believe our formulations would be useful for general viral disinfection and decontamination if used for regular cleaning of certain facilities,” says Bieker.

The Sandia decontamination formulations can be deployed as a foam, fog, mist, or spray, meaning they could be sprayed on walls or dispersed as a fog throughout the air-handling system of a building, says Williams.

The work to inactivate SARS is part of a larger Sandia program to develop a toolkit of technologies useful for responding to future infectious disease outbreaks. The program includes research to model air-flow and predict the transport of airborne chemical and biological agents through buildings or aircraft.

Kansas State University is a comprehensive, research, land-grant institution first serving students and the people of Kansas, and also the nation and the world.