Home / Health and Medicine / Lock to food-borne pathogen pathway may be key to vaccine
02.02.2004

Lock to food-borne pathogen pathway may be key to vaccine 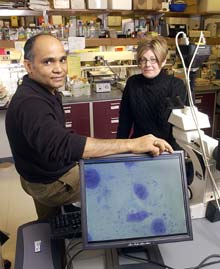 A computer monitor in Arun Bhunia’s research lab displays a Listeria monocytogenes adhering to human intestinal cells. Research conducted by Bhunia, a professor of food science at Purdue, and Jennifer Wampler, a postdoctoral student, led to the discovery of the protein on the surface of intestinal cells that allows a food-borne pathogen to attach to the intestine. (Purdue Agricultural Communications photo/Tom Campbell) <br>

The scientists believe their results eventually could lead to a way to prevent food-borne Listeria monocytogenes infection, which has a 20 percent fatality rate, as well as other diseases. The study of the bacteria is reported in the February issue of the journal Infection and Immunity.

“This research reveals a detailed mechanism that allows interaction of Listeria with a cell-surface protein, or receptor, on intestinal cells,” said Arun Bhunia, a Department of Food Science microbiologist. “Knowing the entryway into the cell will allow us in the future to develop a method to prevent that interaction.”

Jennifer Wampler, a postdoctoral student and lead author of the study, said, “Listeria often is implicated in patients with weakened immune systems, so we think that this research could also give us clues as to how other diseases work. This receptor is not unique for Listeria, so it also could be used by other organisms to take advantage and get inside a host cell to cause disease.”

Bacteria have proteins, called ligands, that bind with a protein molecule, or receptor, on cells in the body, which is like placing a key in a lock. This interaction opens the door that leads to a complicated series of biochemical reactions. These reactions allow the pathogen to enter cells, in this case in the intestine, and then move on into the liver, spleen, brain or placenta, causing illness and possibly death.

Listeria is responsible for about 2,500 recorded food-borne illnesses annually in the United States and is the deadliest food-borne disease, according to the Centers for Disease Control and Prevention. It is especially dangerous for pregnant women, the elderly and those with immuno-comprised diseases such as HIV. The infection can cause meningitis, brain-stem encephalitis and spontaneous abortion.

The Purdue team placed a Listeria protein known to bind with human host cells in a laboratory dish with human intestinal cells. They found that the bacteria’s ligand bound with an intestinal cell surface protein, which they identified as heat shock protein 60 (Hsp60).

Heat shock proteins are found in most cells. They are called chaperone proteins because they help other proteins stay organized when cells face any type of stress. Until recently, it was believed these proteins were only found in the mitochondria, the cells’ engines.

Now that researchers know that these proteins also are found on cell surfaces and act as receptors, they will begin investigating how to control the infection process.

In the study published in Infection and Immunity, the Purdue researchers used an anti-Hsp60 antibody, a built-in disease-fighting antibody that reduced Listeria’s ability to bind with intestinal cells by 74 percent

“If interaction of these two molecules is the beginning of the infection’s intestinal phase pathway that leads to illness, then we need to block them,” Bhunia said. “Our focus now is to determine when and under what conditions the bacterium moves from intestinal cells into the system.

“If we understand the mechanism of how bacteria interacts with cells before causing damage and producing systemic illness, this may allow us to formulate a vaccination strategy to prevent the infection.”

The Purdue researchers plan to study whether the Hsp60 is more abundant in the intestine and also in people most at risk for Listeria-caused food-borne disease, such as pregnant women or HIV patients, Wampler said. They also want to study what other diseases might use this or a similar pathway to enter the body.

Bhunia also is a researcher in the Purdue Center for Food Safety Engineering, a collaboration among the university’s schools of Agriculture, Consumer and Family Sciences, Engineering, Veterinary Medicine and the U.S. Department of Agriculture-Agricultural Research Service.

Reviving cells after a heart attack