Bed bugs in Toronto: A 19th century pest re-emerges in the 21st century 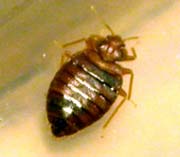 Resurgence may be due to greater resistance to pesticides, socioeconomic conditions

“Bed bugs were once a common urban plague. But with the development of synthetic insecticides such as DDT and spray systems during the Second World War, they were largely eliminated,” says Dr. Tim Myles, an urban entomologist and author of the study published U of T’s Centre for Urban and Community Studies in a recent research bulletin.

In 2002, homeless people told street nurses that bed bugs were a priority medical issue. This year, at least a dozen shelters, hostels, and other forms of public housing had ongoing problems with bed bugs, despite spraying by pest control companies. “The situation merits attentive monitoring. At present, it is not clear to what extent, if at all, such monitoring is currently in place in the Toronto Public Health system,” he says.

What is causing this new resurgence? At present, experts can only speculate that the following factors may be playing a role:

What can be done to eliminate bed bugs? The research bulletin not only mentions commercial pesticides, but also encourages greater awareness, early reporting, monitoring, cleaning efforts by rooming house and hostel residents, and Integrated Pest Management. Non-chemical approaches include thorough searching and mechanical destruction of bugs and eggs, along with laundering of bedding, frequent vacuuming, and brushing mattress seams. The bulletin also describes the effectiveness of sticky traps and even simple carpet tape, which, placed around a bed or bed legs can trap the bugs.