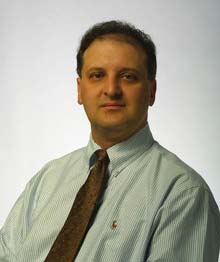 Duke University Medical Center researchers have identified the second of three genes that can each independently cause the disorder known as cerebral cavernous malformations (CCM), which is characterized by mulberry-like clusters of blood vessels in the brain. The finding paves the way for a new genetic test for the rare, familial disease, which typically lies dormant in patients for decades before its potentially devastating symptoms appear, said the researchers.

The vessel lesions in the brain can cause seizures, severe headaches, hemorrhagic stroke and neurological deficits. Affected individuals have a 50 percent chance of passing the disease on to their children.

“People with this mutation are at great risk for developing blood vessel lesions in the brain and their associated symptoms, as are their future children,” said Duke geneticist Douglas Marchuk, Ph.D., who led the study. “This is an example where genetic testing can make a tremendous impact on the care these families receive.” Physicians currently diagnose patients only when lesions are found on an MRI scan after symptoms develop.

The team reports its findings in the December 2003 issue of The American Journal of Human Genetics. The work was supported by the National Institutes of Health and the American Heart Association.

Earlier research into the genetic basis of CCM found that three separate genes in the human genome can, when mutated, cause the disease in different families. In 1999, Marchuk’s team and a second group in France independently discovered the first of these genes, called KRIT1.

Although KRIT1’s function remains unknown, the Duke team more recently found that the protein binds a second protein related to a family of receptors called integrins. Integrins are responsible for cells’ ability to respond appropriately to their external environments.

“While some individuals with CCM have essentially no symptoms, others suffer profound effects on a day-to-day basis,” said genetic counselor Tracey Leedom also of Duke. “The identification of this gene will allow more people with a familial history of the disease to be tested early. If they are found to have the gene, physicians can then conduct an MRI and begin monitoring them carefully for any symptoms.”

Lesions can be surgically removed from the brain in some patients, she added. For others, only the symptoms can be treated.

The team will next seek out the last of the genes known to cause CCM, Marchuk said. The investigators have also begun exploring the biological basis of CCM in mice with the disease.