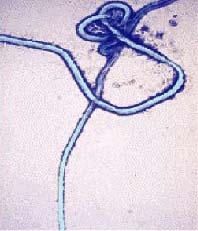 The first human trial of a vaccine designed to prevent Ebola infection opened today. Scientists from the Vaccine Research Center (VRC) at the National Institute of Allergy and Infectious Diseases (NIAID), one of the National Institutes of Health (NIH), designed the vaccine, which was administered to a volunteer at the NIH Clinical Center in Bethesda. The vaccine does not contain any infectious material from the Ebola virus.

Just three years ago, VRC Director Gary Nabel, M.D., Ph.D., together with a team of scientists from the VRC and the Centers for Disease Control and Prevention, described an experimental Ebola vaccine that fully protected monkeys from lethal infection by the virus. One component of that vaccine will now be assessed for safety in human volunteers. The trial vaccine, a type called a DNA vaccine, is similar to other investigational vaccines that hold promise for controlling such diseases as AIDS, influenza, malaria and hepatitis.

“This trial is further evidence of the ability of the VRC to rapidly translate basic research into tangible products,” notes NIAID Director Anthony S. Fauci, M.D. “Our accelerated effort to understand and combat Ebola infection is part of the NIAID commitment to its biodefense mission. An effective Ebola vaccine not only would provide a life-saving advance in countries where the disease occurs naturally, it also would provide a medical tool to discourage the use of Ebola virus as an agent of bioterrorism.”

Outbreaks of Ebola in Africa kill up to 90 percent of those infected. No effective treatment exists for this highly infectious disease, which causes extensive internal bleeding and rapid death. According to experts, vaccination is the best strategy for preventing or containing this deadly infection.

A gap of two decades separated the first Ebola epidemic of 1976 and the next, which arose in 1995. In recent years, for reasons unknown, outbreaks of Ebola are occurring with increasing frequency.

On November 17, 2003, the World Health Organization reported 11 cases of Ebola hemorrhagic fever in the Republic of the Congo. Dr. Nabel notes, “The current Ebola outbreak in the Congo provides a stark reminder of the need to rapidly develop vaccines against such perilous infections. A few years ago, we did not imagine that our vaccine would enter human trials so quickly, but the re-emergence of such viruses makes it all the more important to respond quickly. Individuals who volunteer for these vaccine trials can help us understand if our new vaccines ultimately will be effective.”

Twenty-seven volunteers between the ages of 18 and 44 will participate in the study. Six people will receive a placebo injection and 21 will receive the investigational vaccine, manufactured by Vical Inc., a San Diego biotechnology company working in collaboration with the VRC. Vical has also secured a nonexclusive license from NIH to proprietary gene sequences used in the DNA Ebola vaccine. In the new trial, volunteers will receive three injections over two months and will be followed for one year. Volunteers will not be exposed to Ebola virus. Individuals interested in enrolling in the trial may visit http://www.clinicaltrials.gov or call the VRC toll-free at 1-866-833-LIFE (5433).

The candidate vaccine is synthesized using modified, inactivated genes from Ebola virus. This gives the immune system information about viral structures so that it can mount a rapid defense should the real virus ever be encountered. There is no infectious material in the vaccine, and the virus was not present during any stage of the manufacturing process, notes Barney Graham, M.D., Ph.D., director of the clinical trials unit of the VRC. “It is impossible for the vaccine to cause infection,” he adds, “because it employs new technology known to safely stimulate broad immune responses.”

Besides assessing the vaccine’s safety, researchers will also examine the volunteers’ blood to look for signs of immune system reaction to the vaccine. Ultimately, the scientists envision this vaccine as the first in a two-stage vaccination strategy called prime-boost: after “priming” with the DNA vaccine, the immune system response is “boosted,” or augmented, by a second inoculation with modified, non-disease-causing cold viruses that make selected Ebola proteins. The booster essentially sets the immune system on alert against future infection by Ebola virus.

In August, Dr. Nabel and his colleagues reported using the booster shot to quickly and completely protect monkeys against Ebola. A fast-acting vaccine would be of great use during an outbreak of Ebola. The full prime-boost strategy, which uses the DNA vaccine being tested in this study, elicits a stronger immune response and is important to pursue for individuals at high risk, such as health care workers. Dr. Nabel says that expanded human trials of Ebola vaccines using the prime-boost strategy could begin by 2005.

NIAID is a component of the National Institutes of Health (NIH), which is an agency of the Department of Health and Human Services. NIAID supports basic and applied research to prevent, diagnose and treat infectious and immune-mediated illnesses, including HIV/AIDS and other sexually transmitted diseases, illness from potential agents of bioterrorism, tuberculosis, malaria, autoimmune disorders, asthma and allergies.