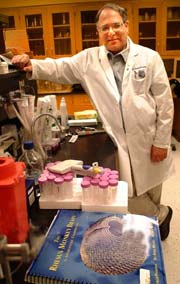 Dr. Jerry J. Buccafusco presents his findings about the benefits of the nicotine metabolite cotinine at the November meeting of the Society for Neuroscience.

A nicotine metabolite shows promise for improving memory and protecting brain cells from diseases such as Alzheimer’s and Parkinson’s without addiction and other side effects of nicotine, says a Medical College of Georgia researcher.

Laboratory studies also indicate the metabolite cotinine may be a safe treatment for the debilitating psychotic behavior of schizophrenics, Dr. Jerry J. Buccafusco, pharmacologist and director of the MCG Alzheimer’s Research Center, says in an abstract presented at the 33rd Annual Meeting of the Society for Neuroscience in New Orleans, Nov. 8-12.

“Many people have thought the drug was an essentially inactive metabolite, but we have shown that at appropriate doses, it is memory enhancing, neuro-protective and it has antipsychotic activities,” says Dr. Buccafusco, who is also a research pharmacologist at the Department of Veterans Affairs Medical Center in Augusta.

“We hope this new appreciation for cotinine’s potential will encourage people to take a look at cotinine and, if not the drug itself, maybe design newer compounds based on cotinine’s structure that have fewer side effects than existing therapies,” he says, noting the need to expand laboratory studies before any clinical work can begin.

“In the case of Alzheimer’s, cotinine may share nicotine’s ability to improve attention and memory and at the same time reduce or halt disease progression. One advantage of cotinine is that it could be used long-term with little concern about serious side effects and substance abuse,” Dr. Buccafusco says.

Cotinine stays in the body much longer than short-acting nicotine but appears much safer than its parent alkaloid, which is highly addictive and causes blood vessel constriction, nausea and stomach cramps. Cotinine’s biggest use has been as a marker for tobacco use by measuring urine levels; its therapeutic potential in curbing smoking also has been explored.

“So cotinine has been taken by humans as a drug and has gotten mixed reviews in the literature about its effectiveness,” says Dr. Buccafusco, who got interested in the metabolite after noting that the memory-enhancing benefit of nicotine lasted long after the drug was eliminated from the body. Nicotine has a half-life in the body of about an hour, yet he noted in studies that the monkeys continued to derive memory benefits long after the nicotine had left the body.

To explore that potential, he used a computer-assisted matching game where monkeys first pick one of three colors on a screen and get a food reward for picking the same color from a choice of two a few moments later. Both young and old monkeys that received cotinine got more correct answers than the ones that didn’t; results were similar to those Dr. Buccafusco has found with nicotine.

Studying cotinine’s effect on neuron-like cells in culture, he was surprised to find cotinine was also as effective as nicotine at preventing cell death. In this model, he took growth factor away from the cells, so they start to die as they do in neurodegenerative diseases such as Alzheimer’s. “If you put nicotine in there, either before or at the time you take away growth factors, it totally prevents the cells from dying. When we tried cotinine in that assay, it worked exactly like nicotine, very well,” Dr. Buccasfusco says. “So we are excited about this possibility.”

To explore its antipsychotic potential, he and colleague Dr. Alvin V. Terry Jr., a pharmacist and pharmacologist on the faculty of the University of Georgia and MCG, used a standard model for studying antipsychotic drugs: laboratory rats given schizophrenic-producing drugs that block the natural filtering capabilities of the brain.

Normally rats, or people for that matter, would be startled by a loud noise. But if a less intense noise precedes it, over time, the rodents will be less startled by the second, louder noise. Antipsychotic medications have a similar effect in reducing the startle response.

“Our drug cotinine was nearly as effective as a standard clinically used anti-schizophrenic drug in reversing this response,” Dr. Buccafusco said. “This finding holds tremendous promise for patients suffering from schizophrenia since the drugs currently in use are oftentimes associated with severe, long-term neurological side effects, such as parkinsonian-like tremors and memory problems.”

Much work remains, including further exploration of how cotinine works and how long it works. Dr. Buccafusco’s lab recently received a transgenic mouse model for Alzheimers’ that develops Alzheimer-like plaques in the brain within the first year of life.

One of his graduate students, Ajay Sood, will use this model for his thesis, studying the neuroprotective potential of cotinine, nicotine and similar drugs in a living disease model. “That is the ultimate test for neuroprotection,” Dr. Buccafusco says.