Home / Health and Medicine / New Device Measures How Much Force Is Used to Deliver a Baby
20.10.2003 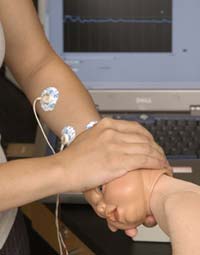 Image A: Three electrodes attached to the forearm are used to pick up electrical impulses in the muscles used to deliver a baby. The data is transmitted to a laptop computer across the room. <br><br>Photo by Will Kirk

When the birth of a baby does not proceed smoothly, how much force should a doctor or midwife apply? If a complicated delivery takes too long, the child could suffocate, yet pulling too hard could injure the child.

To address this dilemma, Johns Hopkins University biomedical engineering students have invented an unobtrusive device that measures the amount of force a doctor or midwife uses while delivering a baby. A wireless transmitter sends the data from the doctor to a computer across the room. The system is already being tested at The Johns Hopkins Hospital, where researchers hope it eventually will help them identify the safest delivery method for a complicated birth. The inventors believe their device also could be used as a teaching tool, helping obstetricians-in-training learn how to assess the amount of force they use during a routine delivery.

The electromyographic instrument, which measures electrical impulses in the muscles of the forearm, was devised and constructed by a team of undergraduates during a semester-long biomedical engineering design team course. Based on this achievement, four team members who made the most significant contributions have been selected as finalists in this year’s Collegiate Inventors Competition, sponsored by the National Inventors Hall of Fame in Akron, Ohio. The Johns Hopkins device was one of six undergraduate projects to advance to this stage of the contest. During the week of Oct. 20, the students will travel to New York City, where the final judging and announcement of winners will take place.

The assignment that produced the device came from design course instructor Robert Allen, a senior lecturer in the Department of Biomedical Engineering. Allen and his obstetrics research colleagues have been looking for a method of measuring the force used in a delivery as a way to help determine the best technique to employ during complicated births. Previously, inventors have placed sensors in gloves or on the hands, interfering with the doctors’ grasp. Allen’s students came up with a less intrusive system, in which three electrodes are attached to the forearm and connected to a small metal box that rests in the doctor’s pocket. The box collects information from the electrodes and transmits it to a receiver up to 50 feet away. The receiver is connected to a laptop computer, which stores and processes the data.

Since April, when the students finished the project, Edith Gurewitsch, assistant professor of gynecology and obstetrics in the Johns Hopkins School of Medicine, has supervised an institutional review board-approved pilot study, testing the device during 15 deliveries performed by physicians and a midwife. The participants wore the electrodes under sterile gowns and gloves. Although some fine-tuning has been required to ensure that the muscle impulses are detected by the electrodes, Gurewitsch said, “The device seems to work well.” The obstetrics researcher is also working with Allen and the Johns Hopkins student inventors, using the device in a lab in which mock deliveries are performed using a baby-size doll.

Generally, physicians or midwives apply minimal force on the child during a routine delivery. But Gurewitsch hopes to use the student-built device in her study of complicated deliveries in which the baby’s shoulder becomes stuck behind the pubic bone. Several different techniques can be used to extract the baby when this occurs. “Our ultimate goal is to use the device to figure out which is the best technique to use in these complicated deliveries,” Gurewitsch said. “We want to find the technique that requires you to use the least amount of force.”

The device must be calibrated to each user. This is done either shortly before or after the delivery, when the physician or midwife’s forearm muscle impulses are recorded at rest and while pulling with five pounds of force, then 10 pounds, as measured by a dynamometer. The students’ device can then produce an accurate record of the force used during delivery by comparing it to the calibration readings.

Beyond the delivery room, the student inventors believe their device could be used for training and research in orthopedic surgery, which can require the use of great force, and in preventing sports injuries. For example, a baseball pitcher might use the device to learn how to throw with considerable force, but not enough to cause an injury. The four students and their instructor, Robert Allen, have obtained a provisional patent covering their device.

The four student inventors are:

William Tam, 22, of Boston, served as the team leader. He received his bachelor’s degree in biomedical engineering from Johns Hopkins in May and is now a biomedical engineering doctoral student at Johns Hopkins. “I have been involved with design teams since my freshman year, and the teams always find innovative ways to solve their proposed biomedical problems,” Tam said. “The course allowed me to apply what I learned into my designs, and I tried to pass the knowledge on to younger students in the class.”

Yen Shi (Gillian) Hoe, 20, of Singapore, is a senior majoring in biomedical engineering at Johns Hopkins. “This was such a great hands-on experience,” she said. “It was so exciting to bring our wireless instrument into the delivery room, where the doctors could use it without interfering with their tactile senses.”

I-Jean Khoo, 23, of Singapore, received her bachelor’s degree in biomedical engineering from Johns Hopkins in May. She is now working on a master’s degree in biotechnology at the University of Pennsylvania. “Science is a definitive field, and I’d like to make a tangible contribution to society through scientific discovery,” she said.

Stanley Huang, 23, of Toronto, received his bachelor’s degree in biomedical engineering from Johns Hopkins in May. He is currently pursuing a master’s degree in biomedical engineering at Johns Hopkins. “We went through many prototypes before we settled on the design of this device,” he said. “It was having trouble picking up signals from the muscles, so we had to use more sensitive electronics. I liked the idea of applying what I’d learned to make something useful.”