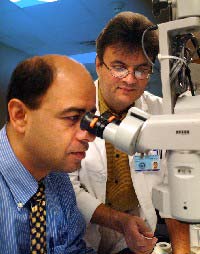 A molecule expressed in the earliest stages of pregnancy that vanishes when the baby is born seems to keep some cells responsible for directing the immune system in an immature and accepting stage, Medical College of Georgia researchers says.

Their finding that the molecule HLA-G helps make dendritic cells – which work like air-traffic controllers for the immune system – tolerant helps explain how a fetus, with genes from both parents, can avoid rejection by the mother’s immune system.

And it has them optimistic that the natural mechanism could be replicated to help preserve a transplanted heart or kidney.

“These immature dendritic cells can induce suppressor cells that will suppress the immune response,” said Dr. Anatolij Horuzsko, reproductive immunologist. He is principal investigator on a $ 1.3 million grant from the National Institute of Allergy and Infectious Diseases of the National Institutes of Health to explore whether this selective immune suppression – which occurs in the placenta where mother and developing baby touch – can help transplant patients avoid rejection without putting them at risk for new infection and disease.

Dr. Horuzsko and his co-investigator Dr. Oscar H. Grandas, transplant surgeon, say it’s a logical pursuit because a fetus is essentially a transplant in which, for nine months, a developing body containing genetically foreign material – the half he gets from his father – often escapes rejection by the mother’s immune system. It’s believed that some lost pregnancies result when, for some reason, localized suppression doesn’t happen.

Amazingly there is evidence that in some transplant patients natural suppression also occurs.

Some of the many questions Drs. Horuzsko and Grandas want to answer are, ’Is the spontaneous suppression mechanism that occurs in some patients the same one that occurs during pregnancy?’ and ’Can they make the suppression happen for all patients?’

Dr. Horuzsko has found that HLA-G binds with the inhibitory receptor on the surface of dendritic cells, leaving the cells, at least for a time, immature and tolerant. In research, published in 2002 in the European Journal of Immunology, he performed skin grafts on transgenic mice which express HLA-G and found some of the dendritic cells oddly changed and nonresponsive, a state which enabled the skin grafts to survive about a month longer than those on normal mice. The human equivalent likely would be much longer since a day in a mouse’s life translates to about a month for a human.

This mechanism provides a targeted escape from the usual rigorous patrol of the immune system. HLA-G is an antigen, which is a substance that gets the attention of the immune system; good antigen matches are desirable between an organ donor and transplant recipient because it reduces the risk of rejection. A fetus and a donated organ have much in common; both logically would be viewed by the immune system as foreign bodies that need elimination because both would have foreign antigens.

“From a transplant point of view, this is a huge problem that we have,” Dr. Grandas said. “We don’t know who we need to immunosuppress,” he said, referencing studies such as a recent one at the University of Pittsburgh that showed that as many as 70 percent of recipients don’t reject their transplanted organs even though they are on minimal immunosuppressive therapy. “What that is telling me is there are people who reject and people who do not and we don’t know why or how to tell who is who. Those are two big areas I have interest in. One is trying to identify the rejecters versus non-rejecters. The second is how can we modify human or animal dendritic cells in order to induce tolerance then wean transplant recipients from immunosuppression to see if we can prolong graft survival,” Dr. Grandas said.

The ability to identify the best matches for patients has improved and the drugs patients take to avoid rejection have as well, Dr. Grandas said of the last 20 years in the transplant field. Ironically the net effect has been that acute rejection rates of grafts, or transplanted organs, have dramatically dropped but many organs are still failing over time.

“Even though the organ is not rejected, they are failing for other reasons,” Dr. Grandas said. “Patients get infected and die with a working graft or they develop chronic graft dysfunction,” because the drugs given to help the graft survive generally suppress the immune system, leaving patients more vulnerable to infection and disease.

So he collaborates with Dr. Horuzsko to test his findings about HLA-G and immature dendritic cells to see if they can create this scenario in animal models with the goal of eventually moving the work to patients.

In the lab, Dr. Grandas is doing islet cell transplants – which include the insulin-producing beta cells of the pancreas – to cure diabetes in rats. With his new NIH grant, Dr. Horusko is going to use HLA-G to modify the dendritic cells of the donor animal then inject them into the recipient rat before Dr. Grandas does the transplant.

Aware that there are likely other factors involved, he will also remove from the recipient some lymphocytes, cells of the immune system that already are programmed for cuing rejection. Transplant patients already get medication to do the same thing. “We will be giving a double whammy of lymphocytic depletion plus dendritic cell injection,” said Dr. Horusko.

One of the many difficulties will be finding the optimal mechanism for inducing the desired, localized suppression. “I believe the future will be injection of a few cells to induce a specific mechanism to create only that and not touch anything else,” Dr. Horuzsko said.

Dr. Grandas believes he is correct because patients would get donor-specific dendritic cells with the same antigen makeup as the organ they receive. “So you will have donor-specific induction of inhibitory cells,” Dr. Grandas said.

“This is a goal because the patient needs to fight infection and, in this case, the immune system will be ready to do that and be tolerant of the transplant only,” Dr. Horuzsko said.

The transplant surgeon noted that the approach other groups in the country are using is total bone marrow transplants in conjunction with organ transplants, which means replacing all components of the immune system plus components for blood production. “We think Dr. Horusko’s approach is a step ahead because you will infuse only a particular subset of cells that have the function we want regulated,” Dr. Grandas said.