Slice of Life – a new technique to scan the human body 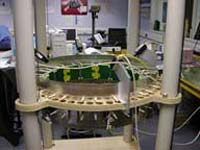 A team of scientists and engineers from the Institute of Food Research and Lancaster University are developing a quick, safe and non-invasive scanner to measure the composition of the human body.

The prototype scanner, featured in the latest edition of New Scientist, uses two imaging techniques to simultaneously build a 3D image of the subject’s shape, and get under the skin to measure body composition.

“Techniques exist for measuring body shape and composition separately, but we are developing a system to put them together in one scanning cubicle with a sensor ring that takes just 20 seconds to scan the whole body. Using an electromagnetic technique to analyse body composition could also enable us to work out the distribution of fat and water, providing a safe and cheap alternative to using X-rays or MRI scanners”, says Dr Henri Tapp of the Institute of Food Research.

Body composition is an indicator of an individual’s nutritional status and health. Regular scans could be used to monitor child development, pregnancy, recovery from injury or surgery and changes during diet and exercise regimes. Anthropometric measures of body shape, such as android (‘apple-shaped’) and gynoid (‘pear-shaped’) fat distributions can be related to health risks such as heart disease. “In addition to clinical applications, our system could become a feature of leisure centres, allowing clients to see how their shape and composition changes through exercise”, says Dr Tapp.

The specially designed scanning cubicle is fitted with four digital cameras and eight light projectors to map the surface contours of the body, to give body volume. An array of coils is used to map the internal electrical conductivity, to give water content. The camera and coils are fitted to a sliding sensor ring, designed to scan the whole body as a series of horizontal ‘slices’.

“Our prototype has demonstrated the feasibility of adopting this approach. The next stage is to develop a prototype system leading to clinical trials and validation of the technology, which we hope to pursue with commercial partners”, says Dr Tony Peyton, from the Engineering Department of Lancaster University.

The prototype scanner uses two imaging techniques to predict the amount of fat present. The system uses coils to map the internal conductivity of the body, to give the amount of water. Digital cameras are used to accurately map the surface contours to give body volume.

Either water or volume can be used with body mass to predict fat. However, combining all three gives a better estimate – by compensating for changes in hydration. An added bonus of this new approach is that it also measures the shape of the body, and that it may also be able to give regional estimates of fat content such as in the limbs and torso, or the amount of surface and internal fat.

The scanner has the coils and cameras mounted on a ring that sweeps past the subject as they stand in a cubicle to build up a picture of the body as a series of horizontal ’’slices’’. In comparison, a commercially available device measures only volume – from the amount of air displaced by a person placed within a sealed chamber. Similarly, you can also buy bathroom scales fitted with electrodes that predict fat, from estimating the water content based on the conductivity of the body.

The current stage of development of the prototype, which was funded as part of an EU project, BodyLife, is currently being presented at the 3rd World Congress on Industrial Process Tomography in Banff, Canada, 2-5 September 2003.

Advantages of this approach: