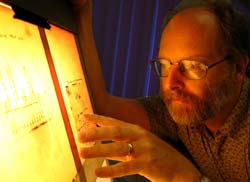 A small subset of cells that tells the immune system whether to attack may be a future target for therapies to help patients fight tumors and keep transplanted organs, a Medical College of Georgia researcher says.

Dendritic cells roam the body, picking up invaders, such as a virus or cancer, then show their finds to the T-cells and tell them how to respond, says Dr. Andrew L. Mellor, molecular geneticist and immunologist and director of the MCG Immunotherapy Center.

Work published in the Aug. 15 issue of The Journal of Immunology by Dr. Mellor and his colleagues gives further clues over what direction dendritic cells will give.

They have shown that giving mice an experimental immunosuppressive agent causes a select number of these cells to express an enzyme, indoleamine 2,3 dioxygenase, or IDO, and that those cells tell T-cells not to respond.

“They are a very fascinating new subset of dendritic cells previously not recognized,” says Dr. Mellor, Georgia Research Alliance Eminent Scholar in Molecular Immunogenetics. “We do not think all dendritic cells have the capacity to express IDO. The magic of this subset is their ability to do that,” he said of the enzyme first identified for its role in helping a fetus escape rejection by the mother’s immune system.

Five years ago nearly to the day, Dr. Mellor and his colleagues, Drs. David Munn and Simon Conway, were reporting in the journal Science that the developing fetus uses IDO to locally disable the mother’s immune system. It works by degrading tryptophan, an amino acid critical to the survival of T-cells, which get their action cues from dendritic cells.

A second Science paper by Drs. Munn and Mellor in September 2002 reported that human dendritic cells could express IDO and showed how the expression suppressed the proliferation of T-cells. “The idea of it simply being expressed in the dendritic cells completely alters our understanding of how dendritic cells talk to T-cells,” Dr. Mellor says. “What is it that makes a dendritic cell decide to express IDO or not, that is the key question.”

Now in animal studies they have made a select number of dendritic cells do just that by giving the drug CTLA4-Ig, a reagent designed to block the action of T-cells. The reagent is still in clinical trials to evaluate its potential for patients with transplants and autoimmune diseases such as multiple sclerosis. In November, scientists from the University of Perugia in Italy were the first to report that treatment with CTLA4-Ig induced the IDO mechanism in dendritic cells, a move that ultimately keeps T-cells from responding.

Although dendritic cells were believed to be a fairly homogenous group, the MCG scientists have shown that only a small number of the cells respond to the reagent. They also used the IDO knockout mice developed at MCG to prove that IDO has to be present for the reagent to have maximal effect, Dr. Mellor says.

These findings take the researchers closer to their goal of targeted manipulation of the immune system. “In principal we can use the new immunosuppressive drug to do that. We can treat mice with the reagent, and introduce antigens that their immune systems would normally respond vigorously to. The prediction is that the mouse treated with this reagent will no longer respond vigorously to these antigens. Our preliminary data indicates that we are on the right track.”

In fact, the Perugia scientists have shown that the mouse model for type 1 diabetes has a specific defect in the IDO mechanism. “That means that if you have a defect in that mechanism, those mice and, therefore by extrapolation, human beings too, are much more likely to get type 1 diabetes.” That knowledge needs to be used to help eliminate or at least reduce the risk of children identified at risk, Dr. Mellor said, referencing a large newborn screening program for type 1 diabetes under way by Dr. Jin-Xiong She, director of the MCG Center for Biotechnology and Genomic Medicine and Georgia Research Alliance Scholar in Genomic Medicine. “We have to use our immunology knowledge to protect patients at risk from getting diabetes,” Dr. Mellor said.

When the immune system is not responsive enough, such as in the case of a tumor, they can block the IDO mechanism in the cells so they would regain the ability to attack. His colleague, Dr. Munn, is moving toward clinical trials on blocking this mechanism pharmacologically, much as they did in the early days to show the role of IDO in helping a fetus avoid rejection.

“It comes back to the unifying theme of what it is at the molecular and cellular level that regulates whether the immune system is going to respond or not to any given circumstance,” Dr. Mellor says. “That is what we are working on and the results reported in this paper represent a significant breakthrough in understanding how to control immune responses.”

###
The MCG researchers have funding from the National Institutes of Health and Carlos and Marguerite Mason Trust.