Home / Health and Medicine / An international treaty for tobacco control
13.08.2003

An international treaty for tobacco control 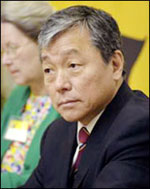 Tobacco use is the leading cause of preventable death in the world today. With 4.9 million tobacco-related deaths per year, no other consumer product is as dangerous, or kills as many people, as tobacco. But with the adoption of a new, ground-breaking international treaty, the scene is now set to protect billions of people from the devastating impact of tobacco consumption and exposure to tobacco smoke.

May 21st 2003 was a historic day for global public health. At the 56th World Health Assembly, WHO’s 192 Member States unanimously adopted the world’s first public health treaty, the WHO Framework Convention on Tobacco Control. Negotiated under the auspices of WHO, this new treaty is the first legal instrument designed to reduce tobacco-related deaths and disease around the world. Now the key is for countries to sign and ratify the Convention as quickly as possible.

Key elements of the treaty

Among its many measures, the treaty requires countries to impose restrictions on tobacco advertising, sponsorship and promotion; establish new packaging and labelling of tobacco products; establish clean indoor air controls; and strengthen legislation to clamp down on tobacco smuggling.

Tobacco products are advertised through sports events, music events, films, fashion – in fact, any place where the tobacco industry can target potential new smokers. The treaty obliges Party States to undertake a comprehensive ban on tobacco advertising, promotion and sponsorship, as far as their constitutions permit. Parties whose constitution or constitutional principles do not allow them to undertake a comprehensive ban must apply a series of restrictions on all advertising, promotion and sponsorship.

Packaging and labelling of tobacco products

As advertising restrictions are implemented, tobacco packaging plays an increasingly important role in encouraging tobacco consumption. The treaty obliges Party States to adopt and implement large, clear, visible, legible, and rotating health warnings and messages on tobacco products and its outside packaging, occupying at least 30% of the principal display areas. This is required within three years of entry into force of the Convention.

Protection from exposure to tobacco smoke

Second-hand smoke is a real and significant threat to public health. Children are at particular risk – exposure to tobacco smoke in children can cause respiratory disease, middle ear disease, asthma attacks, and sudden infant death syndrome (SIDS). The treaty obliges Party States to adopt and implement (in areas of existing national jurisdiction as determined by national law), or promote (at other jurisdictional levels), effective measures providing for protection from exposure to tobacco smoke in indoor workplaces, public transport, indoor public places and, as appropriate, other public places.

For the treaty to come into force, 40 countries must sign and then ratify it. The treaty opened for signature by countries on 16 June 2003 at WHO headquarters, Geneva. From 30 June 2003 – 29 June 2004, it is available for signature at UN headquarters in New York. Signing the treaty represents an expression of political support and good faith in the interim period until ratification. To date, 46 countries and the European Commission have signed, and one country – Norway – has ratified the treaty.

The challenge will then be to implement the treaty and make it a reality on the ground. This will involve putting in place the needed technical foundations, and translating the treaty into national laws. WHO is providing a number of guidelines and materials to support countries to do this. Already, however, countries are using the treaty as a large umbrella under which to strengthen tobacco control. To give some examples, the United Kingdom of Great Britain and Northern Ireland is reassessing its policies on exposure to second hand smoke in public places; the Democratic People’s Republic of Korea has announced that it will double the price of cigarettes to reduce consumption; Tanzania has banned smoking in public places; and Thailand is focusing on cross-border issues and tobacco smuggling.

:: Tobacco causes around 13 500 deaths per day
:: Half of children are exposed to tobacco smoke at home
:: 47.5% of men smoke
:: 10.3% of women smoke
:: Tobacco causes serious health problems [pdf 363kb]
:: A cigarette is the only legally available consumer product that kills through normal use