Home / Health and Medicine / The structure of a key enzyme for infectious diseases solved at ESRF
12.08.2003 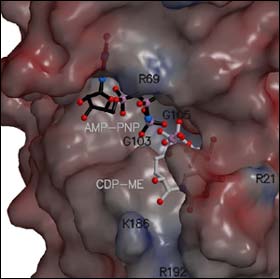 The molecular structure and shape of CDP-ME kinase

A European team of scientists from the University of Dundee (UK), the Technical University of Munich (Germany) and the European Synchrotron Radiation Facility, ESRF, (France) have determined the structure of a key target enzyme for novel drug development to treat infectious diseases including malaria, tuberculosis and sexually transmitted bacterial infections. The results of their collaboration are published on the August 5 issue of Proceedings of the National Academy of Sciences.

Synchrotron radiation at the ESRF played a key role in the determination of the structure of the enzyme CDP-ME kinase. The experiment took place on one of the macromolecular crystallography beamlines at the ESRF. This kinase helps to produce many of the molecules that bacteria and parasites need to live and multiply. A molecule that can prevent the kinase from working normally will poison and kill the pathogenic organisms.

The determination of the structure of the enzyme provides a template for the design of small molecules that will inhibit its action and prevent it from working normally. In the future, the structure may help lead to the development of new potent therapies for a wide range of microbial infections. “These drugs could potentially help the treatment of not only malaria and tuberculosis but also toxoplasmosis, chlamydia, meningitis and cholera for example”, explains Professor Bill Hunter, one of the authors of the article.

Protein crystallography consists of the production of highly pure protein samples. These samples are then crystallised to produce single crystals of the protein. When X-rays interact with single crystals, the interaction between the constituents of the crystal and the X-rays results in the production of an interference pattern – known as a diffraction pattern. By the use of suitable physical and chemical techniques it is possible to use the diffraction patterns in order to determine the spatial distribution of the electrons within the crystal sample. The chemical interpretation of this produces the structural model that reveals the three-dimensional structure of the protein.

The ESRF presents substantial improvements for the exploitation of this technique; in particular the use of intense, highly collimated X-ray beams greatly aids the investigation of small weakly diffracting crystals.