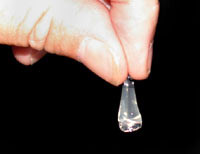 A collagen-based wound sealant recently developed at Texas A&M University could be an alternative for human and animal wound care treatment.

The material – which can be poured or injected into the wound – speeds the closure of wounds, said Dr. Douglas Miller, research scientist with the Texas Agricultural Experiment Station and one of the scientists working on the project.

In testing, Miller and his colleagues found a significant difference in closure between treated and untreated wounds in laboratory rats. The treated wounds had the same amount of healing in three days as the controls in six days, thus speeding the closure of the wound by about 50 percent.

In other words, “The size of the wound shrank more rapidly when treated with the sealant,” he said.

Normally minor soft tissue wounds can repair themselves with minimal treatment, he said. However, diabetic ulcers or sores that heal slowly are another story.

Over human history, thousands of preparations and treatments have been developed to assist in wound repair, he explained. Collagen itself has long been considered a favorite material for wound treatment because it is inexpensive, easily prepared and can be readily shaped to fit the wound site, Miller said. As a natural part of the body, it also causes few allergic reactions.

“Collagen is the most abundant protein in the mammalian body, and in skin, it’s about 60 percent of your total protein,” he said.

“It’s been described as literally the glue that holds you together. The bottom line is that collagen has been used for centuries as something to repair wounds because it is a natural component of the tissue.”

Miller and the other researchers developed a matrix – or mixture – of collagen and other ingredients, as well as a polymerization (chemical) process that helps bind the sealant to the wound. The material, in texture, resembles gelatin but is flexible. Gelatin, on the other hand, is brittle and tears easily.

“If you’ve got a large, open wound, your body moves, your skin moves, your muscles flex, and if this doesn’t flex with it, it simply is going to tear. This has good mechanical strength, but it also has elasticity,” he said.

Miller estimated the collagen-based sealant needs to be applied only once, therefore making it relatively inexpensive compared to other treatments.

About 10 ml – enough to fill a wound a little more than 1 inch in diameter and ½ inch deep – could be made for less than $100, he said. Even if a production as a medical grade material increases the cost, it still would be cheaper than repeated visits to the physician’s office to keep getting the wound cleaned, treated and re-bandaged several times a week, Miller said.

“One dose of this could replace all of that, and all you have to do is change the covering a couple of times a week,” he said.

Miller also believes other healing promoters – such as slow-release antibiotics – could be added to the sealant. Basic Fibroblast growth factor, a protein which stimulates the growth of new connective tissue and blood vessels, already has been tested and found to further increase the rate of wound closure in 1-year-old rats.

He hopes further animal and human studies can begin soon.

“We cannot claim it increases the incidence of healing. That has not been tested yet. We observed that it seems to have decreased the visibility of scars, but we didn’t test that either.”

Additional uses for this material might include a slow release depot for vaccines, adjuvants or drugs; bone repair; or graft or prosthetic implant stabilization.

“This product would have a potential widespread market throughout veterinary medical, and human medical and dental practice,” he said.