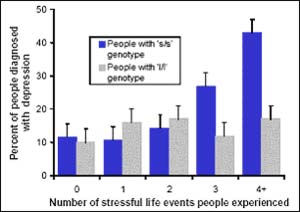 Among people who suffered multiple stressful life events over 5 years, 43 percent with one version of a gene developed depression, compared to only 17 percent with another version of the gene, say researchers funded, in part, by the National Institute of Mental Health (NIMH). Those with the “short,” or stress-sensitive version of the serotonin transporter gene were also at higher risk for depression if they had been abused as children. Yet, no matter how many stressful life events they endured, people with the “long,” or protective version experienced no more depression than people who were totally spared from stressful life events. The short variant appears to confer vulnerability to stresses, such as loss of a job, breaking-up with a partner, death of a loved one, or a prolonged illness, report Drs. Avshalom Caspi, Terrie Moffitt, University of Wisconsin and King’s College London, and colleagues, in the July 18, 2003 Science.

The serotonin transporter gene codes for the protein in neurons, brain cells, that recycles the chemical messenger after it’s been secreted into the synapse, the gulf between cells. Since the most widely prescribed class of antidepressants act by blocking this transporter protein, the gene has been a prime suspect in mood and anxiety disorders. Yet, its link to depression eluded detection in eight previous studies.

“We found the connection only because we looked at the study members’ stress history,” noted Moffitt. She suggested that measuring such pivotal environmental events — which can include infections and toxins as well as psychosocial traumas – might be the key to unlocking the secrets of psychiatric genetics.

Although the short gene variant appears to predict who will become depressed following life stress about as well as a test for bone mineral density predicts who will get a fractured hip after falling, it’s not yet ready for use as a diagnostic test, Moffitt cautioned. If confirmed, it may eventually be used in conjunction with other, yet-to-be-discovered genes that predispose for depression in a “gene array” test that could help to identify candidates for preventive interventions. Discovering how the “long” variant exerts its apparent protective effect may also lead to new treatments, added Moffitt.

Everyone inherits two copies of the serotonin transporter gene, one from each parent. The two versions are created by a slight variation in the sequence of DNA in a region of the gene that acts like a dimmer switch, controlling the level of the gene’s turning on and off. This normal genetic variation, or polymorphism, leads to transporters that function somewhat differently. The short variant makes less protein, resulting in increased levels of serotonin in the synapse and prolonged binding of the neurotransmitter to receptors on connecting neurons. Its transporter protein may thus be less efficient at stopping unwanted messages, Moffitt suggests.

Moffitt and colleagues followed 847 Caucasian New Zealanders, born in the early l970s, from birth into adulthood. Reflecting the approximate mix of the two gene variants in Caucasian populations, 17 percent carried two copies of the stress-sensitive short version, 31 percent two copies of the protective long version, and 51 percent one copy of each version.

Based on clues from studies in knockout mice, monkeys and functional brain imaging in humans, the researchers hypothesized that the short variant predisposed for depression via a “gene-by-environment interaction.” They charted study participants’ stressful life events – employment, financial, housing, health and relationship woes – from ages 21-26. These included debt problems, homelessness, a disabling injury, and being an abuse victim. Thirty percent had none, 25 percent one, 20 percent two, 11 percent three, and 15 percent four or more such stressful life experiences. When evaluated at age 26, 17 percent of the participants had a diagnosis of major depression in the past year and three percent had either attempted or thought about suicide.

The researchers suggest that effects of genes in complex disorders like psychiatric illnesses are most likely to be uncovered when such life stresses are measured, since a gene’s effects may only be expressed, or turned on, in people exposed to the requisite environmental risks.

NIMH is part of the National Institutes of Health (NIH), the Federal Government’s primary agency for biomedical and behavioral research. NIH is a component of the U.S. Department of Health and Human Services.