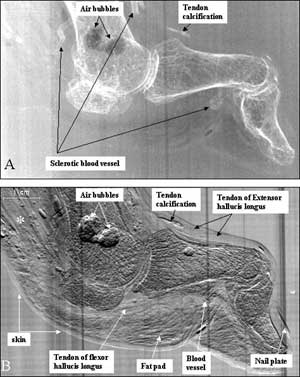 A conventional synchrotron radiograph of a foot (A) and the same foot shown with Diffraction Enhanced Imaging (B). Note the greater variety of soft tissues visible with in the DEI frame. <br>

Provides more information than conventional x-rays or other scanning methods

Scientists at the U.S. Department of Energy’s Brookhaven National Laboratory, in collaboration with researchers at Rush Medical College, have demonstrated the effectiveness of a novel x-ray imaging technology to visualize soft tissues of the human foot that are not visible with conventional x-rays. The technique, called Diffraction Enhanced Imaging (DEI), provides all of the information imparted by conventional x-rays as well as detailed information on soft tissues previously accessible only with additional scanning methods such as ultrasound or magnetic resonance imaging (MRI). This study appears in the May 2003 issue of the Journal of Anatomy.

“We’ve previously shown that this technique can visualize tumors in breast tissue and cartilage in human knee and ankle joints, but this is the first time we have shown it to be effective at visualizing a variety of soft tissues, such as skin, cartilage, ligaments, tendons, adipose pads, and even collagen and large blood vessels,” said physicist Zhong Zhong, who works at the National Synchrotron Light Source (NSLS) at Brookhaven Lab, where the current work was done. “The ability to visualize such a range of soft tissues as well as bone and other hard tissues with just one technique has many potential applications in diagnosis,” Zhong said.

The technique makes use of the intense beams of x-rays available at synchrotron sources such as the NSLS. These beams are thousands of times brighter than those produced by conventional x-ray tubes, and provide enough monochromatic x-ray flux for imaging even after selection of a single wavelength.

In conventional x-ray images, the various shades of gray are produced because different tissues absorb different amounts of x-ray energy. “This works great in imaging bones and other calcified tissues,” said Zhong, “but less satisfactorily in imaging soft-tissues that have similar and low x-ray absorption.” In DEI, the scientists are more interested in the x-rays that pass through the tissue and how they bend and scatter as they do, because these properties vary more subtly between different types of tissue.

To analyze a specimen with DEI, the scientists place a perfect silicon crystal between the sample and the image detector. As x-rays from the synchrotron go through the sample, they bend, or refract, and scatter different amounts depending on the composition and microscopic structure of the tissue in the sample. Then, when the variously bent rays exit the sample and strike the silicon crystal, they are diffracted by different amounts according to their angular spread. So the silicon crystal helps convert the subtle differences in scattering angles produced by the different tissues into intensity differences, which can then be readily detected by a conventional x-ray detector. This results in extremely detailed images that are sensitive to soft tissue types.

For example, in the current study, a conventional radiograph of a human toe shows bones and a calcified blood vessel; except for the faint “shadow” of the surrounding soft tissues and calcification within a tendon, no other structures are visible. The DEI scan of the same specimen in the same position clearly shows skin, the fat pads beneath the bones, the blood vessel, the nail plate, and some tendons, which are clearly distinguishable from the surrounding connective tissue. Within one of the fat pads, even the organizational architecture of the collagen framework is visible. Moreover, the bones take on a three dimensional appearance because of the detail available in the scans.

In the current study, the DEI images were produced with a lower x-ray dose than that used for diagnostic x-rays and no contrast agent was needed, making the technique viable as a potential screening tool, said Zhong.

The scientists are still working on how to scale down the DEI design so that it can be used in a clinical setting. But they say this should be feasible and that the technique may eventually greatly enhance mammography and become increasingly important in the detection of other soft tissue pathologies such as osteoarthritis, breast cancer, and lung cancer.

Collaborators at Rush Medical College include Carol Muehleman, Jun Li, and Klaus Kuettner. This research was funded by the National Institutes of Health, GlaxoSmithKline, Inc., and the U.S. Department of Energy, which supports basic research in a variety of scientific fields.