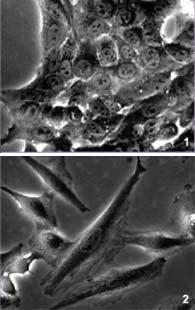 <b> Decreased cell-cell adhesion</b> <br>On the top (1), epithelial cells well organised show tight junction between one-another. <br>Picture 2 shows cells in which Akt is continually activated. They are not bound anymore

Although cells generally tend to “stay at home”, they may sometimes wish to take a look elsewhere, and this wandering has a whole range of consequences. During embryonic development, cells must migrate to give birth to new tissues. This roving spirit is essential to the modeling of the future living organism. In contrast, when tumor cells acquire the capacity to move around and invade other tissues, there is a risk that metastases will develop, thus rendering the treatment of cancer more difficult.

At the Institut Curie, Inserm research scientists in a CNRS unit have just shown that Akt kinase is a “fuel” which enables epithelial cells to move. This discovery, published in Cancer Research of May 1, 2003, opens up new therapeutic perspectives since it may prove possible to curb the formation of metastases by modifying Akt.

United we stand, divided we fall: such is the watchword of epithelial cells. Organized into layers, they cover an external surface, like the skin or a body cavity such as the intestinal mucosa, and must remain within their tissue to fulfill their functions. This cohesion is therefore indispensable for the good functioning of the organism and, like good little soldiers, the epithelial cells are supposed to remain “faithful” to their original tissue till death. But no system is perfect and dysregulation can occur.

This generally occurs through a series of genetic accidents that initiate the cellular “mutiny”. Anomalies accumulate in the genes that govern vital processes (division, differentiation, apoptosis, repair). The cell that has become abnormal escapes all regulation and the process of oncogenesis begins. An initial mutated cell gives rise to all cancer cells, which then form a tumor which becomes increasingly aggressive for its environment and inevitably eludes all control.

Certain cancer cells do not stop at the invasion of a single original tissue, but instead propagate throughout the body. This long march of tumor cells is only possible at the price of numerous mutations. Progressive loss of function or increased activity of certain proteins allows these cells to penetrate another tissue, to pass into a blood or lymph vessel, to propagate, to adhere to a capillary wall, to invade a new tissue. The route taken by “circulating” tumor cells and the organs they target generally vary according to the nature and location of the primary cancer.

Lionel Larue [1] and his team at the Institut Curie are studying how cells, and in particular epithelial cells, acquire their capacity to move around the body. This phenomenon occurs during both embryonic development and in certain tumor cells, which in part explains why oncogenesis is sometimes described as the “mirror image” of embryogenesis (see “Further information on”).

Akt, which is already implicated in numerous processes vital for the cell (see box p. 2), is continually activated in numerous cancers, including cancers of the ovary, pancreas, breast and thyroid.

Lionel Larue and his group, in collaboration with international teams, have therefore sought to elucidate the role of this protein and the consequences of an increase in its activity in tumor cells.

Akt, mainstay of the metastatic transformation

Anchoring proteins found in the cell membrane ensure the cohesion of tissues. Yet if these proteins receive the order to move into the cell, the moorings are broken and the cell can then leave its original tissue.

Sylvia Julien Grille in Lionel Larue’s team, in close collaboration with the group of Alfonso Bellacosa in Philadelphia, has just shown that continuous [2] and not alternating activation of Akt leads to modified expression and relocation of anchoring proteins to the inside of the cell, loss of adhesion between cells, and an increase in the speed at which cells move.

In animal models in which Akt is continually activated in the trachea, researchers at the Institut Curie have also observed an acceleration of cell division and a migration of cells beyond the trachea.

The abnormal continuous activation of Akt therefore confers on cells the mobility required to go and invade other tissues and form metastases.

Biologists, but also chemists, at the Institut Curie now face the challenge of discovering molecules likely to restore cohesion to cells where Akt is continually activated. Akt thus constitutes a promising target for new treatments since by acting on this protein it may be possible to limit the invasion of other tissues by tumor cells. This discovery holds out hope to oncologists since at present one of their major challenges is to curb the formation of metastases.

[1] Lionel Larue is an Inserm research scientist and head of the “Developmental Genetics of Melanocytes” team in CNRS/Institut Curie Joint Research Unit 146 “Cell Regulation and Oncogenesis”.