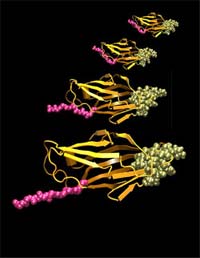 Researchers at the University of Washington have learned that something most people take for granted is not true: that the force of fluids within the human body helps to break the adhesive bonds of invasive bacteria and counterbalance infection.

Most scientists as well as lay people assume, for example, that a sneeze helps clear infection, or that urine helps to clear bacteria from the urinary tract.

This may be true in some cases, but not in all. The presence of fluid force within the body, called shear stress, actually helps the bacteria that cause urinary tract infections, E. coli, to thrive. UW researchers have identified a mechanism by which the bacterial adhesion protein FimH can detect the presence of shear flow and “lock down” the bacteria on the surface being invaded. The protein, which acts as a nanometer-scale mechanical switch, senses when the force is reduced, thus giving the bacteria a chance to scurry along safely.

(A nanometer cannot be seen with the naked eye. It is one-thousandth of a micrometer; in comparison, a strand of human hair can be 50 to 100 micrometers thick.)

The simplest way to think of this is that some bacteria work like a “finger trap.” The harder you pull, the harder your fingers stick in the trap. The more you move your fingers together without force, the looser the trap.

The findings are described in the June 28 issue of the journal Cell.

“E. coli has developed the ability to hold on tight only when the body fluid is trying to push it away. Just by using this finger trap-like mechanism, they’re sensing the strength and direction of the flow. Bacteria will resist high forces that threaten to remove them from the surface, but might move along with a weak ’non-threatening’ flow. In this way, they can move actually against the removing flow,” says Dr. Evgeni Sokurenko, one of the authors and research assistant professor of microbiology in the UW School of Medicine.

Before this paper, people have assumed that E.coli travel from the urinary tract to the kidney only by sending forth bacteria that swim freely against the urine flow until they land on a place to colonize.

The new findings also have significant medical implications. For example,

“We need to know how bacterial adhesion is altered by shear,” says another author, Dr. Viola Vogel, director of the University of Washington’s Center for Nanotechnology in the Department of Bioengineering. “The most amazing part of this is that conventional wisdom says that bacteria have a more difficult time adhering to surfaces when they are subjected to shear force – whether the bacteria are in the intestines, in the urinary tract or in biomedical implants. This paper explains how bacteria firmly adhere to surfaces under shear flow, which is remarkable.”

“This is a fairly startling concept,” says Dr. Harry L.T. Mobley, professor of microbiology and immunology at the University of Maryland School of Medicine. He is not an author of the paper. “This describes a protein that sticks to things. Usually, we think of a protein either sticking to something or not sticking to something. Here we see a protein binding tighter when it is trying to be sheared off. That opens the door to further investigation.”

Presently, most research operates on the assumption that shear stress reduces the lifetime of a receptor bond. However, the paper in Cell suggests that the force might be exactly what it takes to get the bacteria to adhere.

“Bacterial adhesion has been described for a century – bacteria need to adhere in order to colonize,” Sokurenko says. “It’s taken a century before we’ve been able to understand what happens once you see the bacteria clump red blood cells. What happens is that the bacteria and blood cells start to separate after you stop shaking. Then, if you shake them again, they clump again. The moment shear starts pushing them away from the surface, the bacteria adhere tightly. It demonstrates an amazing flexibility by infectious bacteria and provides a mechanism for bacteria to resist the effects of free-flowing inhibitor molecules that can block the adhesion.”

In other words, E. coli appears designed to colonize parts of the body that are exposed to a lot of shear force. It has hair-like protrusions, fimbriae, (with the FimH protein on their tips) that touch the nearby surface, detect the dragging force, and set off a chain of molecular events that cause it to cling more effectively.

The computationally derived insights of how the switch works were tested by using genetic approaches to change individual amino acids on FimH. Thomas and Vogel developed a structural model using steered molecular dynamic simulations describing how mechanical force switches the adhesion strength of FimH from low to high.

“It’s quite remarkable, because this force-induced switching is happening at the tip of fimbriae along distance away from the cell membrane,” Thomas says. “It makes you wonder how many more proteins exist that are switched mechanically – that is a fascinating area for research.”

“We need to know how bacterial adhesion is altered by shear. FimH is the second adhesion protein, after fibronectin, for which we have established a structural mechanism for how nature uses mechanical force to regulate protein function. These adhesion proteins thus serve as nanoscale switches that convert mechanical stimuli into a chemical response,” Vogel says

The forces described in the paper are within the range of shear force found within the body.

UW’s Departments of Microbiology and Bioengineering do considerable research on bacterial adhesion and biomedical devices, respectively.

“A lot of bacteria have been studied under static conditions. What this paper should alert people to is that force profoundly affects the behavior of bacteria and their ability to bind to target cells,” Vogel says.

###
For a video of bacterial movement during flow, see http://www.washington.edu/newsroom/news/images/lotohi.avi The video shows how E. coli moves around on while surrounded by low flow, but then locks down and grips its current position when heavy flow is present.

http://www.washington.edu/newsroom/news/images/fimhB.jpg The Cell paper shows how force stretches FimH. The active site is green, and the force stretches the segment that connects to the rest of the bacteria, in pink.