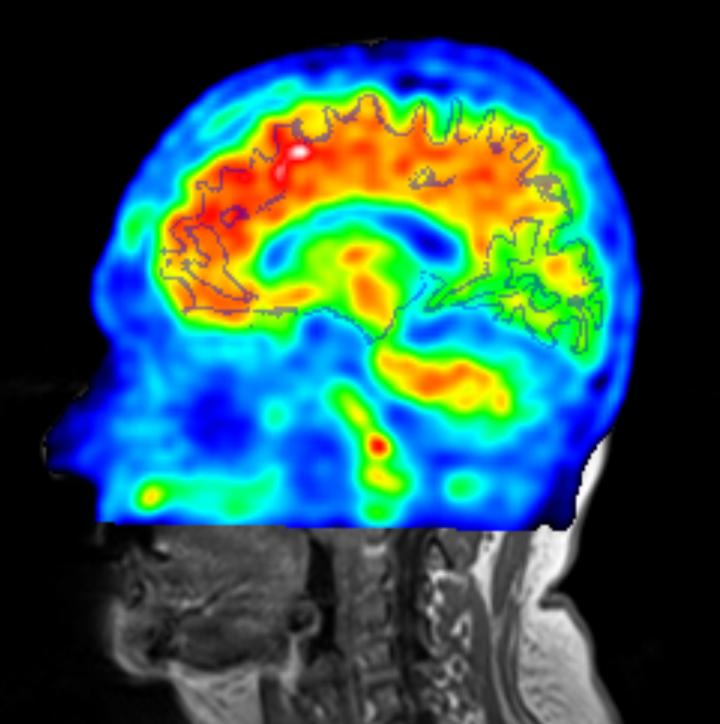 Brain scans are one method used to measure the amount of amyloid in the brain, which may be a sign of mild cognitive impairment. Credit: The University of Miami Miller School of Medicine

The study, “Utilizing Semantic Intrusions to Identify Amyloid Positivity in Mild Cognitive Impairment,” funded by the National Institute on Aging, was published in the September issue of Neurology and earlier online.

Along with study co-author Rosie E. Curiel, Psy.D., assistant professor of psychiatry and clinical neuropsychology, and their colleagues, Loewenstein studied 88 patients with amnestic mild cognitive impairment (aMCI). They identified 34 people in this cohort with underlying, prodromal Alzheimer's disease (AD) by history and amyloid positive scans. Amyloid-beta is an abnormal protein in the brain long associated with the development of AD.

Among the 54 aMCI participants negative for amyloid-beta, 29 were classified as having a clinical course suggestive of AD but suspected non-AD pathology or “SNAP.” The remaining 25 amyloid negative patients had major depression, anxiety or other psychiatric disorders; cerebral infarctions; diffuse Lewy Body disease, or other non-AD neurologic conditions.

The investigators predicted those at greatest risk for AD using the Loewenstein-Acevedo Scales for Semantic Interference and Learning (LASSI-L), a tool developed at the University of Miami. The LASSI-L allowed researchers to uncover specific memory deficits that aligned with imaging findings for abnormal brain amyloid accumulation.

“Developing more sensitive and effective measures to tap the earliest Alzheimer's changes in the brain is essential for providing earlier and more effective treatment, to better understand the neuropathology of the disease, and to monitor emerging interventions,” said Loewenstein.

The LASSI-L measure is a novel “cognitive stress test” validated in both English and Spanish. Researchers ask patients to read 15 words. The words come from three categories — fruits, musical instruments and articles of clothing — of five words each. They ask participant to repeat the list of words, and then cue their recall by category. A second trial repeats this learning task and the cued recall to strengthen their recall.

Next researchers present a list of 15 different words from the same three categories. The patients are asked to recall these new words as a measure of “proactive semantic interference” (PSI). PSI occurs where there is interference in new learning based on previous learning and correlates with risk of developing AD.

Researchers also present the second word list a second time, and repeat the cued recall. This component of the LASSI-L measures how well people can recover from the proactive semantic interference. It's called failure to recover from PSI (frPSI) — and a second indicator of AD risk.

A major finding outlined in the Neurology paper was that the amyloid-beta imaging-positive patients committed a significantly higher number of semantic intrusion errors — specifically on the PSI and frPSI measures – compared to the SNAP and other non-AD patients.

Traditional cognitive measures to identify AD risk do not include PSI or frPSI, so the LASSI-L may represent a specific, non-invasive test that could successfully differentiate true AD from SNAP, the researchers noted.

“The association of the LASSI-L with amyloid positivity makes it useful in the clinical evaluation of preclinical Alzheimer's disease and for appropriate recruitment for clinical and prevention trials,” Loewenstein said. “This also provides an effective and inexpensive way of screening at-risk populations.”

The research is ongoing. Curiel received a new federal grant to computerize the LASSI-L and other novel cognitive measures. In addition, current studies are underway to compare progression on the LASSI-L to brain biomarkers such as MRI, fMRI and PET scans, as well as new agents that assess pathology in the brain.

“We are assisting our national and international institutional partners in developing this cognitive stress test for their investigations and clinical practice,” Loewenstein said. “It is a goal of our Center for Cognitive Neurosciences and Aging and the University of Miami Miller School of Medicine to be at the forefront of these efforts.”