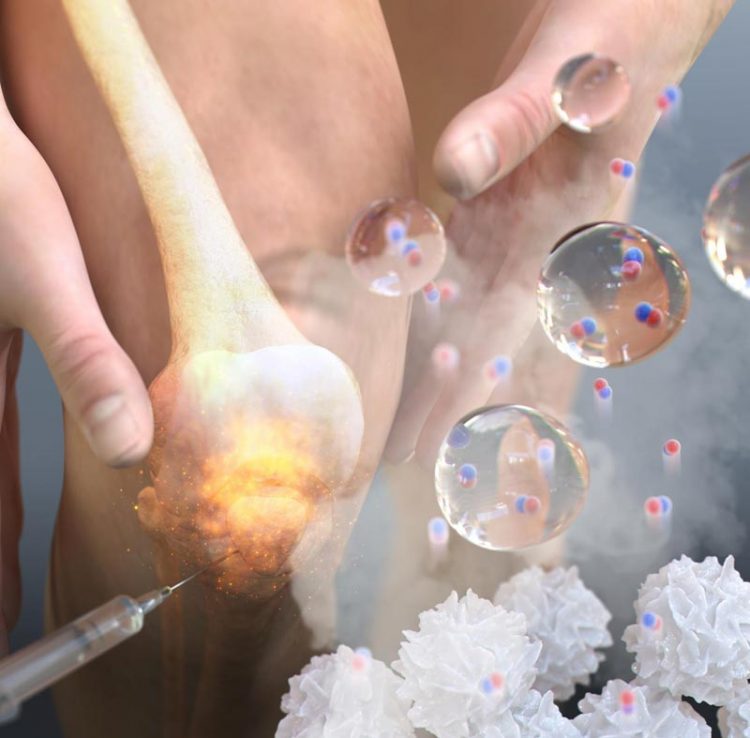 Nitric oxide (NO) prevents high blood pressure and artery plaque build-up in our body. However, its duplicity is shown when it causes serious inflammatory disease such as systemic lupus erythematosus, Cronh's disease, and rheumatoid arthritis.

The research team of POSTECH has suggested a new strategy for treating rheumatoid arthritis and has attracted increasing attention from the field.

The research team consisted of Prof. Won Jong Kim, Jiwon Yeo and Dr. Yeong Mi Lee of Chemistry Department utilized NO-cleavable-crosslinker that reacts to NO and developed a NO-scavenging nano-sized hydrogel (NO-Scv gel). They had done a test on animal successfully and confirmed its better effect than the current therapeutic drugs.

Their new findings are published in the online publication of Nano Letters which is the international journal in Nanoscience. This achievement was advanced from their previous development of NO-responsive hydrogel. Shown its excellent therapeutic effect, it is well expected to see further clinical research to be done.

Rheumatoid arthritis occurs when NO is overproduced in the body. Prof. Kim and his team have consistently studied on a new way to treat this inflammatory disease by scavenging NO and reducing its concentration in the disease site of body.

As a result, they successfully developed a NO-responsive macro-sized hydrogel by integrating NO-cleavable crosslinker (NOCCL) in 2017. And this time, they took one step further and upgraded it to the current model, NO-scavenging nano-sized hydrogel (NO-Scv gel) which consumes NO through reacting with NO.

This hydrogel is prepared by polymerization between acrylamide and NOCCL. It is different from the former drug, which suppresses NO by interaction between gene and enzyme, in that it is directly involved in scavenging NO and minimizes side effects. Also, it has more advantage that it can be applied not only to rheumatoid arthritis but also to other NO-mediated inflammatory disease widely.

The animal test with a mouse proved that this hydrogel is better than dexamethasone, a commercial drug, in suppressing the onset of rheumatoid arthritis effectively.

Prof. Kim who led the research commented, “The drugs that have been used for suppressing NO affect biomolecules in the body directly and this brings various side effects such as insulin resistance and cardiovascular disease. But, this nano-sized hydrogel has demonstrated many meaningful results that it is more effective in treating rheumatoid arthritis by scavenging NO directly and has decreased the possibility of the side effects caused by the current drugs that we use today.