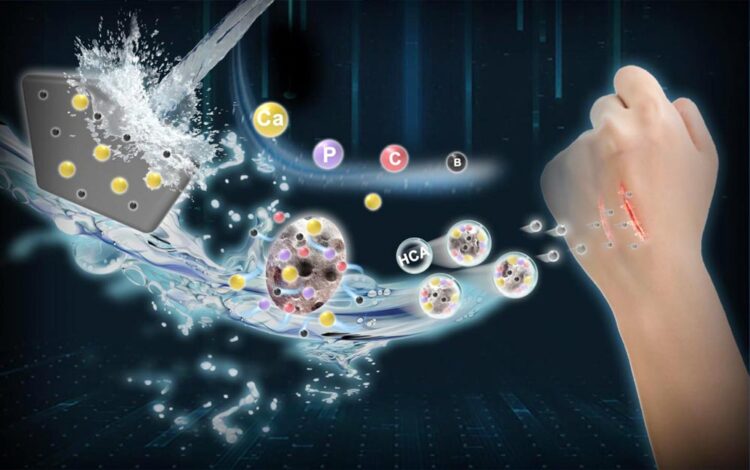 Next generation material for skin-healing.

Recently, with the help of a steady-state strong magnetic field experimental device, scientists constructed nano-scale borate bioactive glass (Nano-HCA@BG), which can effectively reduce the biological toxicity of borate bioglass, improve the biocompatibility of the glass, and promote the effect of borate bioglass on skin repair.

Prof. WANG Junfeng from the Hefei Institutes of Physical Science (HFIPS) of the Chinese Academy of Sciences (CAS), collaborating with Prof. ZHANG Teng from Fuzhou University in this study, said, “it is expected to become the next generation of skin wound repair dressings.” Related research was published in Chemical Engineering Journal.

Borate bioglass is a glass with boron element (B) as the glass network matrix. With good dopability and degradability, it has great potential in the field of skin tissue repair. However, It releases a large amount of alkaline ions, and the explosive release of these ions will change the acid-base environment of the tissue around the glass material, thereby inhibiting cell proliferation.

In addition, the effective surface area of micron-sized borate bioglass in contact with tissues at the wound is small, and the ions on the glass surface are not conducive to the deposition of collagen, so scars are easily formed at the wound after healing. Therefore, preparing a nano-scale borate bioglass with no biological toxicity and excellent biological performance is an urgent problem to be solved.

In this study, the researchers used a special mobile phase, for the first time, to pre-treat micron-sized borate bioglass by melting method in vitro. They obtained Nano-scale (~50nm) borate bioglass (Nano-HCA@BG), which was covered with an amorphous hydroxyapatite (HCA) layer.

During the processing, the ions (PO43- and CO32-) in the mobile phase were deposited on the surface of the glass to form the HCA layer, which effectively inhibited the rapid release of boron and calcium in the remaining glass and thereby reduced the biological toxicity of the glass itself to cells.

In addition, HCA, as an important inorganic component in bones, has good biocompatibility, and can accelerate the induction of collagen synthesis in tissues.

The results of in vitro degradation experiments, cell experiments, and animal experiments showed that compared with the existing commercialized bioactive glass, HCA and micron-sized borate bioglass, nano-HCA@BG slow-released boron calcium, and other elements can effectively accelerate wound cells migration and further up-regulation of the expression of vascular-related growth factors in the wound.

Besides, the amorphous HCA layer on the surface of the glass not only reduces the rapid release of the glass, but also promotes the deposition of collagen in the wound, which in turn promotes the healing of the wound more quickly.

This research was supported by the National Natural Science Foundation of China and a major project of the Ministry of Science and Technology.