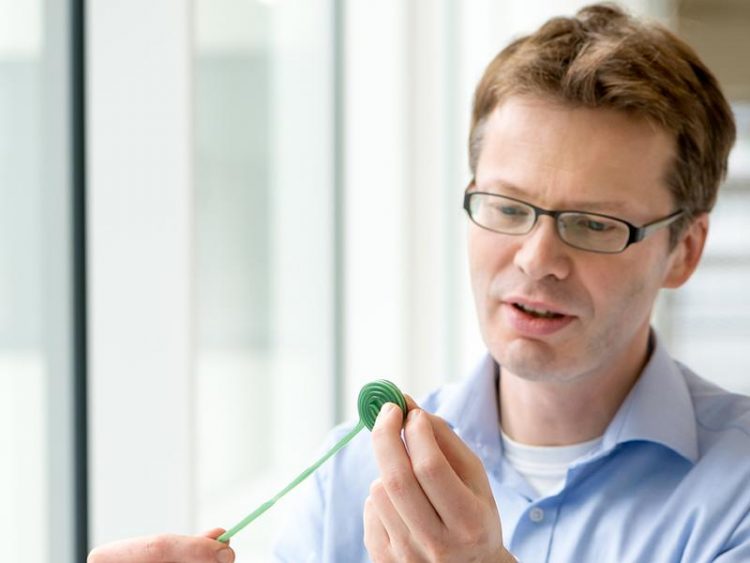 Together with his team Prof. Mikael Simons researches the formation and removal of the myelin sheathes which surround nerve fibers and which are destroyed in Multiple Sclerosis. A. Eckert / TUM

The myelin sheath plays a decisive role in the function of the central nervous system: it is a specialized membrane enriched in lipids, which insulates nerve fibers so that electrical signals can be passed on quickly and efficiently.

In MS, there is a multifocal autoimmune attack against the myelin sheath in the central nervous system, which causes neurological deficits such as loss of motor function. Regeneration of myelin is possible, but in MS it is inadequate.

One of the reasons is presumably chronic inflammation occurring in the lesions. A team led by TUM Molecular Neurobiology professor Mikael Simons has now discovered that after the destruction of myelin crystalline cholesterol can trigger persistent inflammation which prevents regeneration, similar as in arteriosclerosis.

“Myelin contains a very high amount of cholesterol,” explains Prof. Simons. “When myelin is destroyed, the cholesterol released has to be removed from the tissue.” This is performed by microglia and macrophages, also referred to as phagocytes. They take up the damaged myelin, digest it and transport the non-digestible remainder, such as cholesterol, out of the cell by transport molecules.

However, if too much cholesterol accumulates in the cell, cholesterol can forms needle-shaped crystals, which cause damage the cell. Using a mouse model, Simons and his team showed the devastating impact of the crystalline cholesterol: It activates the so-called inflammasome in phagocytes, which results in the release of inflammatory mediators, attracting even more immune cells. “Very similar problems occur in arteriosclerosis, however not in the brain tissue, but in blood vessels,” says Simons.

How well the microglia and macrophages did their job was ultimately also dependent on the age of the animal: the older the animal, the less effective was the clearance of cholesterol and the stronger the chronic inflammations. “When we treated the animals with a medication that facilitates the transport of cholesterol out of the cells, inflammation decreased and myelin was regenerated,” says Mikael Simons. Next he and his team want to investigate whether this mechanism can be used therapeutically to promote regeneration in MS.

A crucial prerequisite for the development of therapies that promote repair is a better understanding of myelin formation. In another study, recently published in the journal “Science Translational Medicine” and led by Prof. Simons and Prof. Christine Stadelmann of the University of Göttingen's Institute of Neuropathology, provides important new insights into this process. The scientists discovered a novel oligodendroglial cell type. Oligodendrocytes are specialized glial cells that are responsible for myelination in the central nervous system.

“We believe that the BCAS1-positive oligodendrocytes that we discovered represent an intermediate stage in the development of myelin-forming cells. In humans they can only be identified for a relatively short period of time, exactly then when myelin is actually being formed,” says Mikael Simons. In the human brain, for example, they are found in newborns, which generate myelin at high rate. In adults, these cells disappear, but they can be re-formed when myelin has been damaged and needs to be regenerated.

“We hope that the BCAS1 positive cells will help us to identify new regenerative medicines,” says Mikael Simons. We can now rapidly screen for drugs that promote the formation of these cells, he adds. Furthermore they could be used to get a better understanding of exactly when and how myelin is created during the course of a human life, he says.

The two research projects were launched in close partnership with scientists at the Max Planck Institute for Experimental Medicine in Göttingen. Prof. Simons is also a member of the Excellence Cluster SyNergy and holds a post at the German Center for Neurodegenerative Diseases (DZNE).