Home / Health and Medicine / Men with Impaired Glucose Metabolism Should Avoid High-Carbohydrate Foods in the Evening
09.03.2017 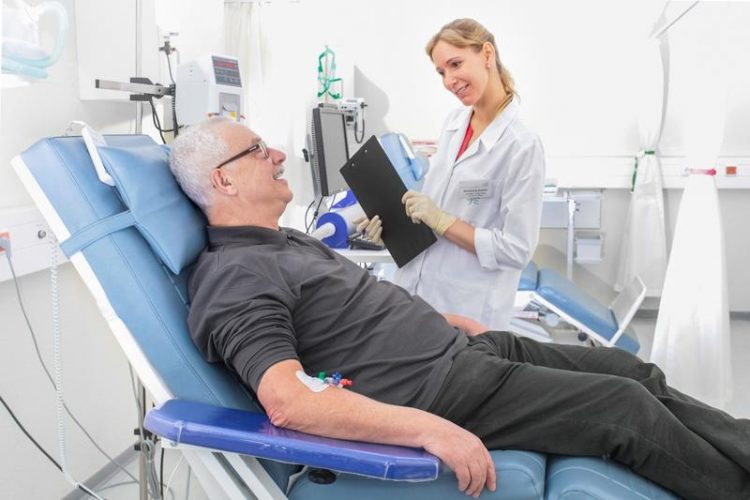 Participant of a nutritional study is talking to a study nurse. Till Budde/DIfE

It has long been known that the internal clock plays a role in the regulation of metabolic processes and that the glucose metabolism is therefore subject to a certain daily rhythm. Moreover, recent studies on rodents indicate that the internal clock also affects how the metabolism responds to the intake of carbohydrates or fats, and that certain time frames are more suitable than others for the consumption of a high-carbohydrate or a high-fat diet, seen from a health perspective.

Similarly, human observation studies have found that persons who eat a high-carbohydrate, low-fat diet in the morning have a reduced risk of type 2 diabetes or metabolic syndrome. The latter is characterized by symptoms such as excessive fat deposits in the abdomen, hypertension, and a disturbed glucose and lipid metabolism. However, the exact interaction between the kind of diet and the circadian regulation of the glucose metabolism has not yet been sufficiently investigated.

In order to find out more about the physiological mechanisms underlying this interaction, the scientists at DIfE conducted a nutrition study on a total of 29 men. On average, they were about 46 years old and had an average body mass index of 27, meaning they were normal to very overweight. In 11 of the participants, the scientists identified a glucose metabolism disorder at the start of the study.

“As our study shows, at least for men with a glucose metabolism disorder, the time of day at which they eat a high-carbohydrate meal is relevant. When we compared the blood glucose measurements according to the two diets, their blood glucose levels after diet B averaged 7.9 percent higher than after diet A, in which the participants consumed a high-fat meal in the evening. Interestingly, we were not able to observe this effect in healthy men, although we generally noticed a decline in glucose tolerance during the course of the day, both in the healthy as well as in the persons with a glucose metabolism disorder.

However, this was much more pronounced in the latter,” said first author Keßler. Furthermore, in the affected men the researchers observed an altered secretion of the intestinal hormones glucagon-like peptide-1 (GLP-1)** and peptide YY (PYY)***, which contribute to the regulation of the glucose metabolism or body weight and whose secretion is subject to a particular circadian rhythm. Thus, the blood levels of the two hormones decreased significantly parallel to the pronounced decrease of glucose tolerance in the afternoons in the affected persons in contrast to the healthy participants.

“The circadian rhythm of the hormonal release thus influences the way we react to carbohydrates,” said endocrinologist Pfeiffer, who heads the Department of Clinical Nutrition at DIfE. For that reason, the diabetologist Rudovich and the scientist Pivovarova recommend that especially people who already have a disturbed glucose metabolism should orient themselves on their internal clock and avoid high-carbohydrate meals in the evening.

Only men participated in the study because it is considerably more difficult to investigate circadian rhythms in women due to the menstrual cycle.

** Glucagon-like peptide-1 (GLP-1): In the intestine, so-called L cells secrete GLP-1 after they have been stimulated by carbohydrates (e.g. sugar), proteins or fats. The peptide hormone has a half-life of less than two minutes, stimulates insulin release, and at the same time inhibits the release of glucagon which serves as the counter-balancing hormone to insulin. Both lead to a decrease in the blood glucose level. In addition, studies indicate that it restores the insulin sensitivity of pancreatic beta cells and at the same time inhibits their programmed cell death. In addition, it retards the absorption of carbohydrates from the intestine and has a saturating effect (Source: Wikipedia).

The German Institute of Human Nutrition Potsdam-Rehbruecke (DIfE) is a member of the Leibniz Association. It investigates the causes of diet-related diseases in order to develop new strategies for prevention and therapy and to provide dietary recommendations. Its research focus includes the causes and consequences of the metabolic syndrome, which is a combination of obesity, high blood pressure, insulin resistance and lipid metabolism disorder, as well as the role of diet in healthy aging and the biological basis of food choices and eating habits. In addition, DIfE is a partner of the German Center for Diabetes Research (DZD; https://www.dzd-ev.de/), which was founded in 2009 and has since been funded by the BMBF.

The Leibniz Association (https://www.leibniz-gemeinschaft.de/start/) is the umbrella organization for 91 independent research institutions whose spectrum encompasses the natural, engineering and environmental sciences, economics, the spatial and social sciences as well as the humanities. Leibniz Institutes address issues of social, economic and ecological relevance. They conduct knowledge-driven and applied basic research, also in the overarching Leibniz research networks; they comprise and maintain scientific infrastructure and provide research-based services. The Leibniz Association sets priorities in knowledge transfer, in particular with the Leibniz research museums. It provides advice and information for policymakers, academia, business and industry, and the general public. Leibniz institutions maintain close cooperative relationships with universities – inter alia in the form of “Leibniz Science Campi”, as well as with industry and other partners in Germany and abroad. They are subject to a transparent and independent evaluation procedure. Due to the importance of the Leibniz Institutes for Germany as a whole, they are funded jointly by the federal government and state governments, employing some 18,600 individuals, including 9,500 researchers. The overall budget of the institutes amounts to more than EUR 1.7 billion.