Home / Health and Medicine / Lung cell patches its own DNA on the fly to survive influenza
30.07.2019 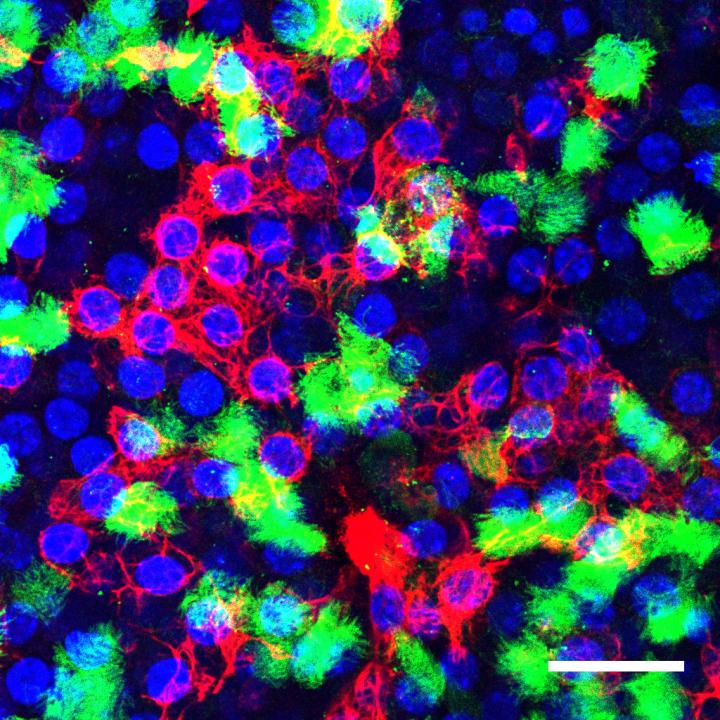 Duke researchers are studying one kind of lung cell that ramps up its DNA repair mechanisms to resist being killed by influenza. (Ciliated cells are green, basal cells are red, and cell nuclei are blue). Credit: Nicholas Heaton Lab, Duke University

Scientists at Duke University have identified one kind of lung cell that can hustle to repair its damaged DNA and survive an attack of the influenza A virus while other kinds of cells around it die in droves.

The finding reveals more about the battle between cells and viruses at the smallest level, and also may provide some important clues for respiratory conditions such as chronic obstructive pulmonary disease and asthma.

The resilient cell is called a club cell and it's found in the narrowest airways just above the alveoli of the lungs where gases are exchanged in the blood, said Nicholas Heaton, an assistant professor of molecular genetics and microbiology in the Duke School of Medicine. The cell's normal function is to produce surfactants and secrete various other proteins that coat the lining of the lungs. Their functions during a viral infection however, have remained incompletely understood.

Heaton and his team had found in 2014 that club cells could survive a flu infection that would kill most cells. In a 2016 study, they watched club cells crank up their protein-making machinery when under a viral assault and signal the immune system to produce high levels of pro-inflammatory molecules called cytokines.

The net result of club cell survival would be that the lungs remain somewhat hostile to new viruses even after an infection has cleared, Heaton said.

As evidence of that, he points to an intriguing clue from the 2009 influenza pandemic: The flu virus that year was actively replicating in the summer months, not its usual fall and winter months. That year another RNA-based seasonal virus, the respiratory syncytial virus (RSV), was unable to infect people at the same time that it normally would, as if the population were better able to resist it.

“It suggests that influenza makes some sort of changes that make you better able to resist another respiratory infection,” Heaton said. And the club cells were probably players in this.

“We knew from previous work that club cells could survive, but we had no idea how,” Heaton said.

In the latest work, appearing July 29 in Nature Microbiology, Heaton's lab, along with Sara Cherry, a colleague at the University of Pennsylvania, sorted through all of the club cell's viral response pathways during infection. They found that the club cells were ramping up DNA mismatch repair in response to infection.

An invading virus's weapon of choice is reactive oxygen, which it uses to damage any sections of DNA that are open and active within the host cell. Normally, that damage accumulates to the point that the cell can't express the genes it needs to fight off the virus, whereupon it dies.

But the club cell somehow redoubles its efforts to repair DNA damage and makes it through the infection.

To confirm that was the case, the researchers created an engineered virus that carried the necessary RNA to truly clobber all the DNA repair machinery in cultured human club cells, whereupon the club cells died from flu just like other respiratory cells.

Having patched their damaged DNA, and survived the influenza infection, club cells continue their work of producing surfactants and chemicals that encourage inflammation.

“If another virus comes in, the environment it normally comes into is pretty antiviral,” Heaton said, which might explain the mystery of the missing respiratory syncytial virus in 2009.

But the survival of club cells is a two-edged sword, Heaton said. While a proinflammatory environment helps control virus levels, it's actually the over-activity of inflammation that can kill influenza patients, often after they've cleared the flu virus. The club cells that survive and stay active might actually contribute to this.

“Now we have a population of cells we know are going to be hyperinflammatory on the back side of an infection,” Heaton said. “When we deplete club cells, there's less inflammation,” which might be an important insight to addressing chronic obstructive pulmonary disease or asthma, Heaton said.

This research was supported by the National Institutes of Health, the Burroughs Wellcome Fund and Duke University. Duke has filed a provisional patent application for targeting DNA mismatch repair as a way to grow influenza vaccine strains in the lab.