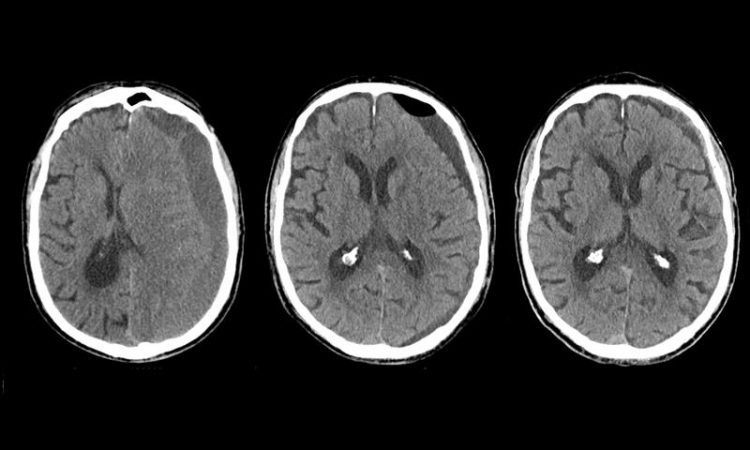 Chronic subdural haematoma is bleeding between the brain and the skull, the intracranial space, usually following a head injury. It occurs predominately among elderly people who take a blood thinner. The blood can be drained with a relatively simple surgery involving two small burr holes, and approximately 80% of the patients are cured.

Despite surgery, recurrent bleeding occurs at the same place among a minority of patients, and surgery must be repeated a few days or weeks thereafter. In order to discern whether a second surgery is needed, a computed tomography (CT) scan is usually performed to determine how much blood remains between the brain and skull after surgery. Researchers at the University Neurocenter Bern at Inselspital have questioned how well these images in general serve to predict the need.

For this purpose, half of a study group comprised of just over 350 patients went without a CT scan after surgery and were only clinically monitored. The other half of the patients received CT scans. The authors found that there was no benefit for the patients with the CT scans.

On the contrary: Patients who were monitored only neurologically and without routine CT scans had fewer subsequent surgeries, fewer complications, and ultimately lower treatment costs.

Imaging as a second step only when needed

Lead author Prof. Dr. med. Philippe Schucht explains the results: “When we make a CT scan after surgery, basically all patients still have blood around the brain. As the attending physician, it is tempting to perform a second surgery to achieve a ‘better’ result and also prevent recurring ailments for the patient. In most patients, however, this residual blood is resolved by the body with time, which is why it is difficult to predict whether another surgery is needed later. In the event that the bleeding gradually increases, those affected will experience headaches or weakness again. Then we still have time to examine and perform a CT scan – but only when it is truly necessary.”

The study, published in the “New England Journal of Medicine” on 20 March 2019, concludes that in their follow-ups, neurologists can less invasively and more reliably identify the few patients requiring another CT scan and if needed another surgery, without the need for a routine CT scan.

This is also evidenced by the fact that 59 subsequent surgeries were carried out in the study group with a CT scan, whereas only 39 were carried out in the group without a CT scan. And that with fewer complications (19 patients without a CT scan vs. 26 with a CT scan). In this case, less can really lead to more for the patients, according to the recommendation by the authors of the study.