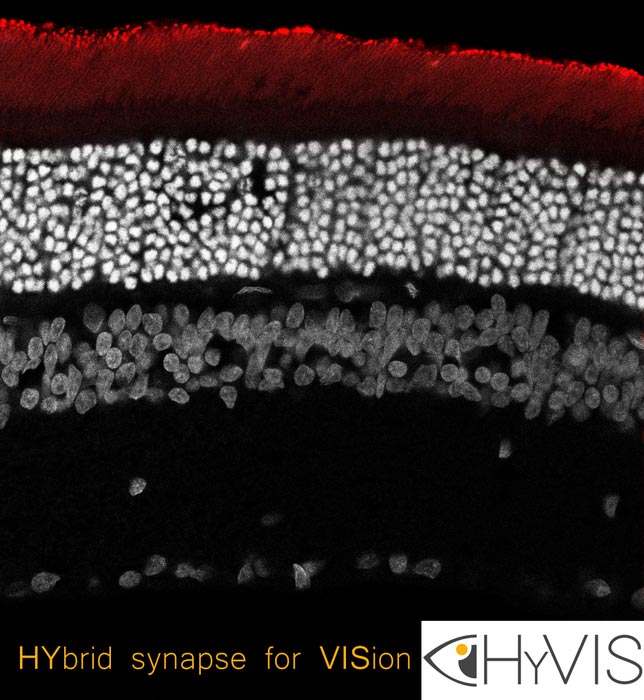 The European project coordinated by the IIT-Istituto Italiano di Tecnologia will last for four years and has received €3 million in EU funding under the Horizon 2020 program.

HyVIS, the European project coordinated by the IIT-Istituto Italiano di Tecnologia (Italian Institute of Technology), is about to start. By combining nanotechnology and optics, it will develop bionic synapses for retinal prostheses, designed to restore sight in people suffering from diseases such as retinitis pigmentosa and age-related macular degeneration (AMD). The project, which will last for four years, has received €3 million in EU funding under the Horizon 2020 program.

Retinitis pigmentosa and AMD, at least in their early stages, are disorders that affect the photoreceptors, i.e. the cells that receive the light signal and transmit it to the optic nerve via synapses with the retinal neurons. These diseases are widespread and have a strong impact: it is estimated that there will be around 288 million people affected by AMD alone in 2040, with a cost of more than USD 400 billion. Although the photoreceptors in these diseases degenerate over time, the retinal neurons remain functional.

The idea of HyVIS arises from the possibility of exploiting residual neuronal functionality to form bionic synapses, made up of state-of-the art nanodevices and retinal neurons that are ‘disconnected’ from the photoreceptors, to restore their sensitivity to light.

“HyVIS – explains Elisabetta Colombo, project coordinator and researcher at the IIT Center for Synaptic Neuroscience and Technology, directed by Fabio Benfenati and located at the IRCCS hospital Policlinico San Martino in Genoa – will make it possible to restore the physiological activation of inner retinal neurons with very high spatial resolution. The aim is to ensure that, in the presence of light, these neurons are activated with a resolution of more or less 5 mm, comparable to thw one achieved by the cones in the middle of the retina and responsible, in humans, for high-resolution vision.

The HyVIS approach is based on some properties that have already been tested: firstly, the fact that if a microinjection of glutamate (the main excitatory neurotransmitter at the retinal level) is carried out under the retina in experimental models of retinal degeneration, it is possible to stimulate the neurons; furthermore, the ability of particular structures called plasmonic nanocannals to amplify the electromagnetic field generated by light and interact with the neurons on a nanometric scale, which is the scale at which synapses act, will be exploited. Specifically, the plasmonic nanocanal device, once brought into contact with postsynaptic neurons, will be filled with intelligent polymers that will release neurotransmitters in response to light stimuli, emulating the physiological release process. The device will also be coated with appropriate presynaptic adhesion molecules to recreate the synaptic environment, thus creating proper hybrid synapse. This solution will represent a potential technological breakthrough compared to existing retinal prostheses.

This innovative technology will be developed by two IIT research groups – the one coordinated by Elisabetta Colombo and another one directed by Francesco De Angelis, head of IIT Plasmon Nanotechnologies – which have significant experience in nanomaterials and nanofabrication and neuroscience, with special focus on the visual system and neural interfaces for restoring vision. But IIT will not be the only Institute to contribute with its expertise in retinal prosthetics: indeed, HyVIS brings together some of the most important European research groups in this field, which have contributed to the development of prostheses already approved for clinical purposes.

The revolutionary retinal neuroprosthesis proposed by HyVIS will not only have a strong social return, proposing a new therapeutic strategy for degenerative blindness and thus improving the quality of life of people affected by retinal dystrophies, but also a significant impact on the economy and public health systems, representing an economic and market innovation.