How brain cells pick which connections to keep 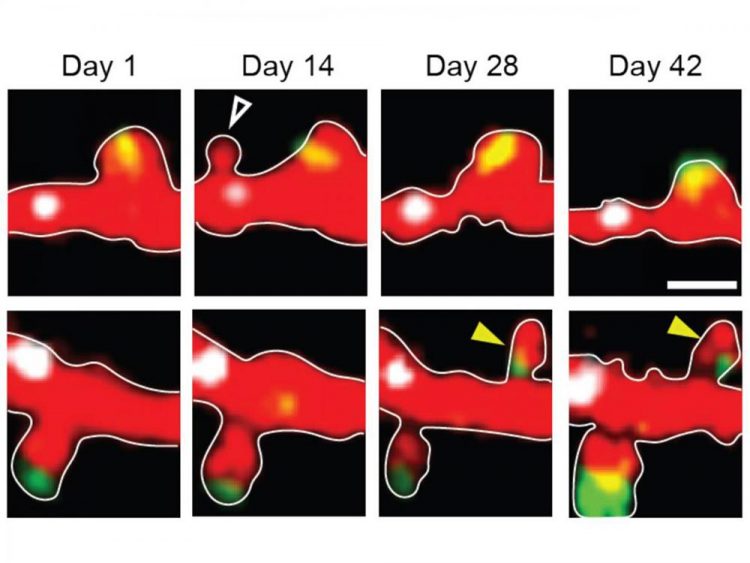 The major criterion for excitatory synapse selection is based on how well they engage in response to experience-driven neural activity, but how such selection is implemented at the molecular level has been unclear.

In a new study, MIT neuroscientists have identified the gene and protein, CPG15, that allows experience to tap a synapse as a keeper.

In a series of novel experiments described in Cell Reports, the team at MIT's Picower Institute for Learning and Memory used multi-spectral, high-resolution two-photon microscopy to literally watch potential synapses come and go in the visual cortex of mice – both in the light, or normal visual experience, and in the darkness, where there is no visual input.

By comparing observations made in normal mice and ones engineered to lack CPG15, they were able to show that the protein is required in order for visual experience to facilitate the transition of nascent excitatory synapses to permanence.

They need more trials and repetitions to learn associations that other mice can learn quickly. The new study suggests that's because without CPG15, they must rely on circuits where synapses simply happened to take hold, rather than on a circuit architecture that has been refined by experience for optimal efficiency.

“Learning and memory are really specific manifestations of our brain's ability in general to constantly adapt and change in response to our environment,” Nedivi said. “It's not that the circuits aren't there in mice lacking CPG15, they just don't have that feature, which is really important, of being optimized through use.”

Watching in light and darkness

The first experiment reported in the paper, led by former MIT postdoc Jaichandar Subramanian, who is now an assistant professor at the University of Kansas, is a contribution to neuroscience in and of itself, Nedivi said. The novel labeling and imaging technologies implemented in the study, she said, allowed tracking key events in synapse formation with unprecedented spatial and temporal resolution.

The study resolved the emergence of “dendritic spines,” which are the structural protrusions on which excitatory synapses are formed, and the recruitment of the synaptic scaffold, PSD95, that signals that a synapse is there to stay.

The team tracked specially labeled neurons in the visual cortex of mice after normal visual experience, and after two weeks in darkness. To their surprise they saw that spines would routinely arise and then typically disappear again at the same rate regardless of whether the mice were in light or darkness.

This careful scrutiny of spines confirmed that experience doesn't matter for spine formation, Nedivi said. That upends a common assumption in the field, which held that experience was necessary for spines to even emerge.

By keeping track of the presence of PSD95 they could confirm that the synapses that became stabilized during normal visual experience were the ones that had accumulated that protein. But the question remained: How does experience drive PSD95 to the synapse? The team hypothesized that CPG15, which is activity dependent and associated with synapse stabilization, does that job.

To investigate that, they repeated the same light vs dark experiences, but this time in mice engineered to lack CPG15. In the normal mice, there was much more PSD95 recruitment during the light phase than during the dark, but in the mice without CPG15, the experience of seeing in the light never made a difference. It was as if CPG15-less mice in the light were like normal mice in the dark.

Later they tried another experiment testing whether the low PSD95 recruitment seen when normal mice were in the dark could be rescued by exogenous expression of CPG15. Indeed, PSD95 recruitment shot up, as if the animals were exposed to visual experience. This showed that CPG15 not only carries the message of experience in the light, it can actually substitute for it in the dark, essentially “tricking” PSD95 into acting as if experience had called upon it.

“This is a very exciting result, because it shows that CPG15 is not just required for experience-dependent synapse selection, but it's also sufficient,” says Nedivi, “That's unique in relation to all other molecules that are involved in synaptic plasticity.”

A new model and method

In all, the paper's data allowed Nedivi to propose a new model of experience-dependent synapse stabilization: Regardless of neural activity or experience, spines emerge with fledgling excitatory synapses and the receptors needed for further development. If activity and experience send CPG15 their way, that draws in PSD95 and the synapse stabilizes. If experience doesn't involve the synapse, it gets no CPG15, very likely no PSD95 and the spine withers away.

The paper potentially has significance beyond the findings about experience-dependent synapse stabilization, Nedivi said. The method it describes of closely monitoring the growth or withering of spines and synapses amid a manipulation (like knocking out or modifying a gene) allows for a whole raft of studies in which examining how a gene, or a drug, or other factors affect synapses.

“You can apply this to any disease model and use this very sensitive tool for seeing what might be wrong at the synapse,” she said.

In addition to Nedivi and Subramanian, the paper's other authors are Katrin Michel and Marc Benoit.

The National Institutes of Health and the JPB Foundation provided support for the research.