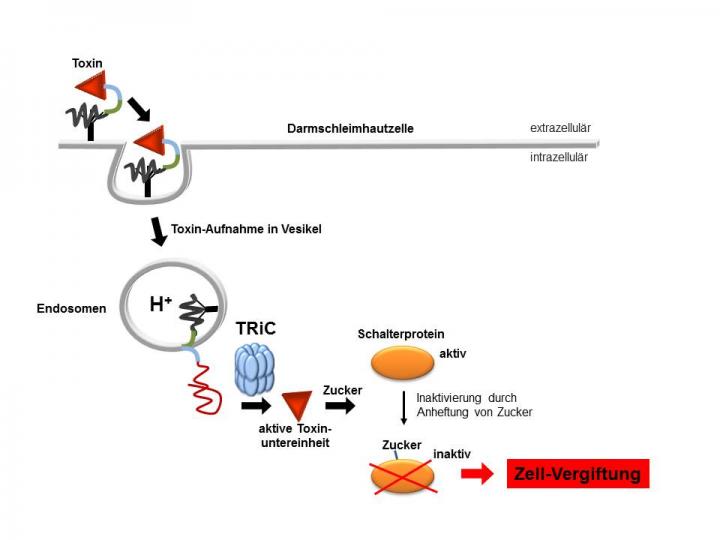 Toxins produced by the bacterium Clostridium difficile penetrate the intestinal cell with the help of the protein known as TRiC. Credit: Source: Klaus Aktories

A working group headed by Professor Dr. Dr. Klaus Aktories of the Institute of Experimental and Clinical Pharmacology at the University of Freiburg, collaborating with Professor Dr. Andreas Schlosser of the Rudolf Virchow Center in Würzburg, has shown how the microbes' poisonous proteins penetrate intestinal cells.

The results of their study are published in the highly respected journal, the Proceedings of the National Academy of Sciences.

Clostridium difficile produces toxins in the gut which get into cells in the intestinal mucosal surface, disrupting their barrier function. Researchers have long known how these toxins affect cells. They transfer sugar to switch proteins, rendering them inactive.

This leads to disintegration and death of the cell. But it was not known how the relatively large proteins in the toxins were able to enter the host cell. It was only known that the bacterial toxins bind with the surface of intestinal cells and enter via tiny pores from blister-like structures in the cytoplasm called vesicles.

As the working group has shown, further up-take of the toxins depends on the protein TRiC. It is responsible for folding proteins – which occur as long chains of amino acids in the cell – giving them their three-dimensional structure.

The researchers found that TRiC also plays an essential role in folding bacterial toxins, which are transferred through the cell membrane as long chains and, once inside, have to be re-folded. When the researchers blocked TRiC with an inhibitor or switched it off genetically, poisoning of the cell did not occur.

The effect of other bacterial toxins which can transmit sugars is also dependent on TRiC. These latest findings may help researchers find active agents to combat the toxins.