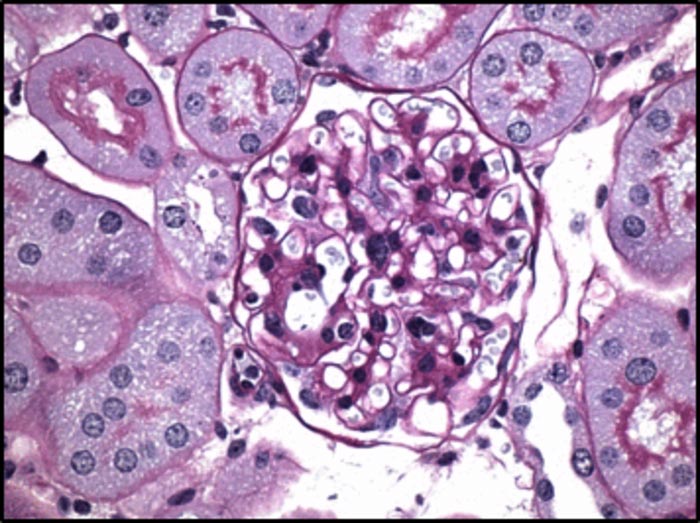 The larger, centrally located structure shown here is a glomerulus in a mouse kidney, which is known to be damaged by diabetes, as made evident by the scar tissue dyed purple in the image. The study authors show that administration of RAGE229 to diabetic mice reduced damage to the glomeruli and surrounding structures in the kidney.
Credit: Reprinted with permission from A. Schmidt et al., Sci. Transl. Med. 13, eabf7084 (2021).

An experimental compound reduced complications of type 1 and type 2 diabetes in mice – not by lowering blood sugar – but by countering its consequences: cell death, inflammation, and organ damage.

Published online in Science Translational Medicine on November 24, the study reported that a new class of compounds blocked the ability of a protein called RAGE to pass on inflammatory signals that injure the heart and kidneys in diabetes, and that slow the healing of diabetic wounds.

The results revolve around the body’s immune system, which recognizes and destroys invading bacteria and viruses. This system’s activation causes inflammation, responses like swelling and pain that result from the homing in by immune cells into sites of infection or injury. Many diseases – including diabetes – include misplaced inflammation that damages tissues.

“Our results establish the molecular backbone of RAGE229 as the foundation for a new approach that targets intracellular RAGE actions to counter diabetic tissue damage,” says lead study author Ann Marie Schmidt, MD, the Dr. Iven Young Professor of Endocrinology at NYU Grossman School of Medicine. “With further refinements, RAGE229 and its descendants have great potential to fill gaps in treatment, including that most current drugs work only against type 2 diabetes.”

Most narratives of diabetes say that diet and age (Type 2) or genetic differences (Type 1) reduce action or production of the hormone insulin, which keeps blood sugar levels in check after meals supply the body with energy. While high blood sugar causes inflammatory damage, past work has also established that mechanisms occurring later in, and common to, both types of diabetes could be targeted separately by novel drug candidates.

In particular, high blood sugar generates greater numbers of charged particles that tear apart cell components like DNA. This kills cells, which fall apart and spill their contents, including damage-associated molecular patterns or DAMPS. Such “danger molecules” inform the body that a tissue is under stress, in some cases by activating RAGE, say the authors.  When a DAMP docks into RAGE on a cell’s outer surface, it changes the receptor’s shape to pass messages into the cell’s inner compartment, the cytoplasm. Schmidt and colleagues had shown previously that the RAGE cytoplasmic “tail” (ctRAGE) interacts with a protein called DIAPH1 to pass on such messages, which ultimately activate inflammatory genes.

The current research team screened through a library of 59,000 compounds to ultimately develop RAGE229, the candidate that best interfered with the DIAPH1:ctRAGE interaction. Using a test that triggers inflammation in mice as measured by swelling in their paws, the team showed that those treated with RAGE229 had a significantly lower inflammation score of 2.5 (on a 1-5 scale) versus a score of 3.3 in mice given an inert solvent, also called a vehicle, for comparison.

Other experiments reflected the increased risk for heart attack in patients with diabetes, created in part by higher inflammation levels. In male mice with type-1-like diabetes and a temporary blockage of a coronary artery, simulating a heart attack, the researchers found that the amount of heart muscle that died (infarct volume) downstream of a blockage was 28 percent in RAGE229-treated mice, versus 38 percent in mice treated with vehicle.

The team next incorporated the RAGE229 molecule into mouse chow because dietary intake could better measure its ability to reverse long-term complications like diabetic wounds. High blood sugar and related inflammation have been shown to interfere with cells that create scar tissue to close wounds. The researchers found that the percent of wound closure after 21 days was 90 percent in male type 2 diabetic mice treated with RAGE229, compared to 65 percent in those treated with vehicle. Both male and female mice treated with RAGE229 also had significantly better healing than vehicle-treated mice at the microscopic level (histological evidence).

“The RAGE229 used in the our study will not the be version recommended should it move forward into human clinical trials,” says Schmidt. “We continue to aggressively synthesize and test new compounds and chemically modifications RAGE229. These new molecules promise to yield a final drug candidate with optimal potency in the foreseeable future.”

Along with Schmidt and first study author Michaele Manigrasso, authors from the Diabetes Research Program, Division of Endocrinology, Diabetes and Metabolism were Nosirudeen Quadri, Lander Egaña-Gorroño, Laura Frye, and Ravichandran Ramasamy; along with Piul Rabbani of the Hansjörg Wyss Department of Plastic Surgery; Boyan Zhou and Huilin Li in the departments of Population Health and Environmental Medicine; all at NYU Langone Health. Also authors were Lisa Ramirez, Sergey Reverdatto, Stephen Dansereau, Jinhong Pan, and co-senior author Alexander Shekhtman of the Department of Chemistry, The State University of New York at Albany; Vivette D’Agati in the Department of Pathology at Columbia University Irving Medical Center, and Robert DeVita of RJD Medicinal Chemistry and Drug Discovery Consulting LLC, in Westfield, N.J.