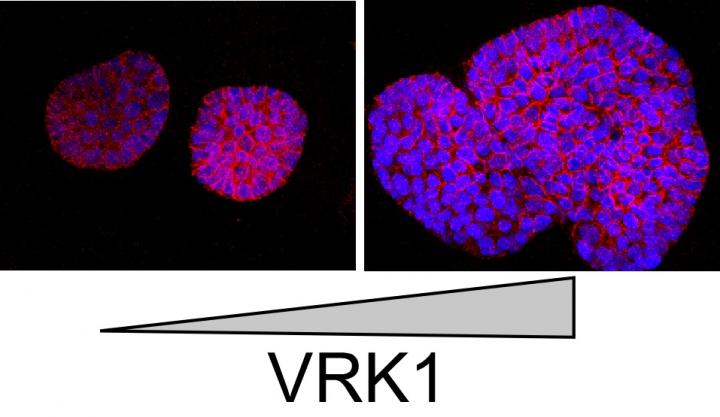 When mammary epithelial cells are grown in a 3D culture matrix, they proliferate and form hollow colonies that mimic the organization of an epithelial tissue. 3D cultures of control cells (left) and cells that over-express VRK1 (right) behave very differently in this context. Although all cells organize into colonies and form cell:cell junction markers (red, cadherin), VRK1 over-expression leads to much more vigorous cell proliferation and the formation of larger colonies. These results may have relevance to the colonization of tissues during cancer metastases. (images taken from Mon, MacKinnon and Traktman, PLoS One) Credit: Created by Paula Traktman from images appearing in Figure 5C of the September 4, 2018 article by Mon, MacKinnon and Traktman, as allowed by the Creative Commons License (https://creativecommons.org/licenses/by/4.0/)

Sometimes negative results can point researchers in the right direction.

In results published in PLOS ONE on September 4, 2018, scientists at the Medical University of South Carolina (MUSC) examined a protein called vaccinia-related kinase 1 (VRK1) that they hypothesized was important for metastasis. They found that, rather than causing cancer cells to migrate and invade, VRK1 over-expression had the opposite effect.

Yet this behavior could well help cancer to establish itself in new parts of the body, according to study director and Hirschmann Endowed Professor Paula Traktman, Ph.D., in the MUSC Hollings Cancer Center.

Traktman and graduate student Aye M. Mon started with the idea that high levels of VRK1 might be associated with breast cancer. Other research had suggested this, and Traktman's own work had revealed that depleting VRK1 caused cells to grow more slowly and to cause smaller tumors and fewer metastases in mice. Drawing on these results, Mon and Traktman wanted to see how cells would grow when VRK1 was over-expressed. “The logic was that, if we over-express VRK1, maybe the cells would grow faster and maybe they would be invasive and migratory and contribute to metastasis,” said Traktman.

To their surprise, they found that the opposite was true. When they over-expressed VRK1 in mammary epithelial cells growing in tissue culture dishes, those cells did not grow more rapidly than cells with normal levels of VRK1. And, contrary to their hypothesis, the cells tended to migrate and invade much more slowly.

But, when the VRK1 over-expressors were cultured under 3D conditions that mimic tissues, they grew more rapidly and established larger colonies. Intrigued, Mon and Traktman took a closer look at the characteristics of these cells. They examined a hallmark of cancer cells known as epithelial-to-mesenchymal transition, or EMT. Many cells undergo EMT on their way to becoming cancer cells. The transition enables them to migrate away from the tumor.

They observed that the cells with high levels of VRK1 were more apt to form cell-to-cell connections and had lower levels of mesenchymal markers that are often present in cancer cells. Rather, the cells seemed to undergo the opposite transition, from mesenchymal to epithelial. The cells were much less likely to migrate.

These negative results pointed the researchers in a new direction. If high levels of VRK1 caused cancer cells to migrate more slowly, perhaps VRK1 was necessary to enable cells to colonize a new area of the body. In such a process, cancer cells spreading throughout the body would need to abandon the characteristics that make them spread and adopt the traits of cells that would anchor them in place. It is that kind of behavior that allows metastases to begin growing in other parts of the body.

To confirm their new hypothesis, Traktman and Mon teamed up with pathologist A. C. McKinnon at the Medical College of Wisconsin. McKinnon provided the team with cells from breast cancer patients who had metastases to their lymph nodes. They found much higher levels of VRK1 in the lymph node metastases than in the primary tumor cells. In addition, they examined the expression levels of VRK1 in public databases of breast cancer and found that high levels of VRK1 were associated with the most aggressive cancers. Such high levels were also associated with the worst prognoses in patients with metastatic breast cancer.

Traktman summarizes the process. “For a tumor to be aggressive, some of the cells have to break off of the primary tumor and invade through the surface and into the bloodstream and then out of the bloodstream and find a new site,” said Traktman. “In order to form a metastasis in a new area, the cells have to stop being wanderers and colonize.” And it is possible that VRK1 over-expression enables such cancer cells to colonize new sites in the body.

Traktman and Mon suspect that this finding may extend to other types of cancer, such as brain cancer and liver cancer. In fact, high levels of VRK1 are found in certain types of liver cancer. These results justify the search for small molecules that might inhibit VRK1. Also, VRK1 may one day serve as a biomarker of aggressive cancers, which could thus inform oncologists as they decide on more advanced or conservative courses of treatment.

Traktman and Mon stress the importance of keeping their minds open as they conduct their research. “You can go into research with one model and be completely wrong, and it can actually turn out more interesting than you think,” said Traktman. “It's a lesson for letting the data take you down the road to an interesting finding.”

Founded in 1824 in Charleston, The Medical University of South Carolina is the oldest medical school in the South. Today, MUSC continues the tradition of excellence in education, research, and patient care. MUSC educates and trains more than 3,000 students and residents, and has nearly 13,000 employees, including approximately 1,500 faculty members. As the largest non-federal employer in Charleston, the university and its affiliates have collective annual budgets in excess of $2.2 billion. MUSC operates a 700-bed medical center, which includes a nationally recognized Children's Hospital, the Ashley River Tower (cardiovascular, digestive disease, and surgical oncology), Hollings Cancer Center (a National Cancer Institute-designated center) Level I Trauma Center, and Institute of Psychiatry. For more information on academic programs or clinical services, visit musc.edu. For more information on hospital patient services, visit muschealth.org.

The Hollings Cancer Center at the Medical University of South Carolina is a National Cancer Institute-designated cancer center and the largest academic-based cancer research program in South Carolina. The cancer center comprises more than 100 faculty cancer scientists and 20 academic departments. It has an annual research funding portfolio of more than $40 million and a dedication to reducing the cancer burden in South Carolina. Hollings offers state-of-the-art diagnostic capabilities, therapies and surgical techniques within multidisciplinary clinics that include surgeons, medical oncologists, radiation therapists, radiologists, pathologists, psychologists and other specialists equipped for the full range of cancer care, including more than 200 clinical trials. For more information, visit http://www.hollingscancercenter.org