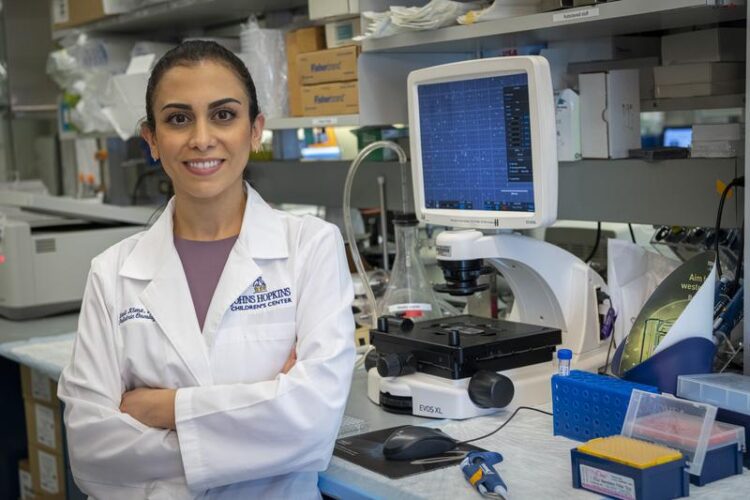 For many blood cancer patients, a stem cell transplant is the only chance of survival. However, up to 30-50% of transplant recipients can develop the often life-threatening complication called graft-versus-host disease (GVHD).

Dr. Yiouli Ktena, scientist at the Johns Hopkins University in Baltimore (USA), has developed a new, epigenetic approach: She hopes to use it to effectively combat GVHD while preserving the immunological power of donor cells. For the realization of her promising project, she received the DKMS John Hansen Research Grant, which is worth €240,000.

Extreme abdominal pain and cramps, the dissolution of mucous membranes, severe skin rash, nausea, diarrhea, liver damage – these are just some of the many symptoms that can occur in GVHD. Often, this complication can even be fatal. Dr. Yiouli Ktena has set herself the goal of helping affected patients. She is a specialist in pediatric hematology and oncology and conducts research at the renowned Johns Hopkins University. “For some of my patients, stem cell transplantation, which involves replacing the patient’s immune system with a donor’s immune system, is the only chance for a cure. This includes children and young adults with cancer, such as certain types of aggressive leukemia and lymphoma, or non-malignant diseases such as bone marrow failure”, she explains. But even if the tissue characteristics of donors and patients match completely, GVHD can occur after stem cell transplantation. “And you still can’t predict in whom, why, and when that will happen”, she says.

GVHD is a severe immunological reaction in which the graft turns against the recipient. Each graft contains immune cells from the donor in addition to the actual stem cells. While the donor stem cells settle in the patient’s bone marrow and create a new, healthy blood and immune system, the foreign immune cells migrate through the recipient’s body after transplantation. Ideally, they destroy cancer cells and prevent the cancer from returning, a process known as the graft-versus-tumor effect. However, if the donor’s immune cells attack the patient’s healthy cells because they recognize them as foreign, GVHD will occur.

“The current treatments available for GVHD put patients at increased risk of infection and cancer recurrence,” says Dr. Ktena. “This is a big problem: If you curb the immune response of the transplanted donor cells, GVHD decreases, but the patient also becomes more susceptible to infection and cancer recurrence.” Her research approach therefore goes in a different direction: she wants to epigenetically manipulate the donor cells responsible for GVHD in favor of the patient. “Our goal is to contain GVHD while maintaining the potency of the new immune system, or the graft-versus-tumor effect.”

To accomplish this, she is studying the role of epigenetics in the development of GVHD. Epigenetics is a scientific area of interest that encompasses the changes that determine the expression of certain genetic traits independently of the DNA sequence – on the smallest level, this would be the decision whether a gene is “switched on” in the cell or not. In the field of epigenetics, the enzyme DNMT3A (DNA (cytosin-5)-methyltransferase 3A) plays an important role. The enzyme is able to mark the DNA by a chemical bond. This labeling makes the DNA practically invisible to the cell and it is no longer actively used by the cell. DNMT3A thus regulates important cellular processes. It has been observed that patients who have received a stem cell transplant from a donor carrying a mutation in DNMT3A are more likely to suffer from GVHD – at the same time they are less likely to experience a relapse. Interestingly, DNMT3A mutations are not rare. According to one study from 2020, 6.2% of the total population carried a DNMT3A mutation, with an age-related increase in prevalence.

Using genetically modified T cells, Dr. Ktena was able to successfully recreate the DNMT3A phenomenon in the laboratory. She was thus able to examine these cells for their epigenetic characteristics. In particular, she looked at which DNA segments were chemically modified and how they differed from normal T cells. Interestingly, these cells were overall very similar to normal cells, with the exception of very localized differences that were surprisingly specific. The altered DNA regions are located within genes that are directly related to the activation, proliferation, and differentiation of T cells.

“These data are significant in three ways. They demonstrate the importance of epigenetic regulation in modulating T cell activation after stem cell transplantation and provide us with a basis for studying epigenetic signatures of donors to predict the risk of GVHD in recipients. Second, they also allow us to consider epigenetic modifications as a therapeutic tool. Finally, the data can be used as a platform to discover new gene pathways that could potentially also be used as therapeutic targets,” says Dr. Ktena. “Now going through all this data and sorting through all the pathways that we have identified is truly a labor of love – but we are getting there!”

One interesting target has already emerged from the data: CCR9, a chemokine receptor that directs T cells to the gut – one of the main areas where GVHD starts and manifests. CCR9 has been targeted in patients with inflammatory bowel disease and could now potentially be targeted in the context GVHD as well. “We have already started some of these experiments targeting CCR9, and our lab is looking forward to the promising results,” says Dr. Ktena.

A generous research grant offers Dr. Yiouli Ktena the financial security to implement her promising project: In 2020, she was awarded the DKMS John Hansen Research Grant by the DKMS Stiftung Leben Spenden (Foundation for Giving Life). In this way, DKMS Stiftung Leben Spenden, the umbrella organization of the non-profit stem cell donor center DKMS, annually supports up to four outstanding young scientists who, like DKMS itself, have set themselves the goal of improving the survival and healing chances of blood cancer patients. Interested scientists are invited to apply for the John Hansen Research Grant 2023 – the application deadline is December 2, 2022. The grant provides funding of €240,000 for each awardee for a time period of three years (maximum €80,000 annually). All application details and further exciting research projects of the grant awardees can be found on the DKMS Professionals Platform at: https://professional.dkms.org/research-grant or email grant@dkms.org.