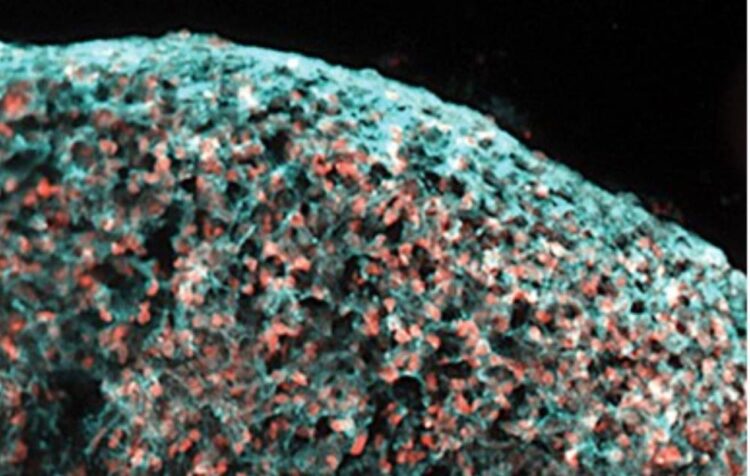 Mount Sinai researchers were able to recreate much of the damage seen in a widely-studied form of frontotemporal dementia by growing special types of cerebral organoids in petri dishes. Experiments on the organoids showed disease-causing mutations in a protein called tau may trigger a cascade of molecular events that led to the death of a specific class of neurons known to be vulnerable in frontotemporal dementia.
Courtesy of the Goate lab, Mount Sinai, N.Y., N.Y.

Results show how neurons may be damaged by mutations in tau protein, a hallmark of Alzheimer’s and other dementias.

Frontotemporal dementias are a group of fatal and debilitating brain disorders for which there are no cures. In an article published July 26 in Cell, Mount Sinai researchers describe how they were able to recreate much of the damage seen in a widely studied form of the disease by growing special types of cerebral organoids in petri dishes. This form of the disease is caused by a genetic mutation in tau, a protein that is a hallmark of Alzheimer’s disease and other dementias. By studying these organoids, the scientists discovered how the mutated tau protein may trigger the death of a specific class of neurons known to be vulnerable in frontotemporal dementia. They also showed that they could prevent the death of these neurons by treating the organoids with an experimental drug, originally designed to combat Crohn’s disease.

“Frontotemporal dementia is a devastating disease for patients and their loved ones. Understanding the causes of dementia can be difficult, as most of the damage to the brain occurs well before any symptoms appear. It’s like trying to unravel the events that created a crime scene. In this study, we were able to model many aspects of the pathology seen in the brains of patients who carry the V337M mutation in tau,” said Alison M. Goate, DPhil, Director, Ronald M. Loeb Center for Alzheimer’s Disease at Mount Sinai, and a senior author of the study. “Our results identified several very early transcriptomic and proteomic changes that lead to the formation of tau pathology and neuronal death. Our goal is to help researchers develop novel treatments against frontotemporal dementias and prevent the suffering experienced by patients and their families.”

Frontotemporal dementia is a rare form of dementia that usually begins between ages 40 and 60. It affects the front and side (temporal) areas of the brain, leading to behavior changes and difficulty with speaking and thinking.

Induced pluripotent stem cells are created by genetically and chemically reprogramming a person’s skin or blood cells into newborn stem cells, which have the potential to become any cell in the body. From these stem cells, the NSCI created thousands of tiny, 3D cerebral organoids, which mimic the early growth and development of the cerebral cortex for intensive study by collaborating scientific groups.

“Induced pluripotent stem cells are powerful tools. They allow researchers to study each patient’s personalized disease in a petri dish,” said Sally Temple, PhD, Scientific Director of the NSCI and a senior author of the study. “In this study we were able to take this idea to the next level. By combining iPSC-organoid technology with high-throughput, single cell gene activity analysis, we were able to get a better look at what might be going on in a patient’s brain at early stages of disease development, even before symptoms emerge.”

In this study, the researchers examined the growth and development of organoids derived from the stem cells of three patients, all of whom carried the V337M mutation in tau. They then compared their results with those observed in “isogenic,” control organoids. The controls were derived from patient stem cells in which the disease-causing mutation was genetically corrected.

After six months of growth, signs of neurodegeneration were seen in the organoids. Most notably, the patient-derived organoids had fewer excitatory neurons than those derived from the control cells, demonstrating that the tau mutation was sufficient to cause higher levels of cell death of this specific class of neurons. Excitatory neurons usually fire in response to the neurochemical glutamate and are known to die at abnormally high levels in frontotemporal dementia. The patient-derived organoids also had higher levels of harmful versions of tau protein and elevated levels of inflammation.

“Excitatory neuron cell death, tau protein deposits, and inflammation are classic hallmarks of the kind of damage seen in many forms of frontotemporal dementia,” said Dr. Bowles. “What we wanted to know next was: what are the cellular and molecular processes that occur before the appearance of these disease hallmarks?”

The researchers found clues by examining two- and four-month-old organoids.

For instance, two-month-old mutant organoids appeared to be undergoing elevated levels of cellular stress, whereas four-month-old ones developed problems with autophagy, or the recycling of proteins. The results also suggested that during these early months the excitatory neurons matured faster in the mutant organoids than in the controls.

Other experiments suggested that many of these changes may have been the by-product of a complex interaction between mutant tau, excitatory neuronal genes, and ELAVL4, a protein that controls gene activity by binding to ribonucleic acid (RNA) molecules.

“Our results suggest that the V337M mutant tau sets off a vicious cycle in the brain that puts excitatory neurons under great stress. It hastens the production of new proteins needed for maturation but prevents disposal of the proteins that are being replaced,” Dr. Bowles said.

Further experiments supported this idea. For example, excitatory neurons in mutant organoids were less likely to survive in the presence of toxic levels of glutamate than those in control organoids. The researchers then found that this could be prevented by apilimod, an experimental drug designed to alter a cell’s protein recycling system. In other words, the researchers saw no difference in levels of glutamate-induced cell death between mutant and control organoids when they treated samples with apilimod.

“With the aid of tools like cerebral organoids, we can model and learn to understand the causes of dementia,” Dr. Goate said. “There is hope is that one day we will develop effective treatments for frontotemporal dementia and other heart-wrenching neurodegenerative disorders.”

About the Mount Sinai Health System

The Mount Sinai Health System is New York City’s largest academic medical system, encompassing eight hospitals, a leading medical school, and a vast network of ambulatory practices throughout the greater New York region. Mount Sinai is a national and international source of unrivaled education, translational research and discovery, and collaborative clinical leadership ensuring that we deliver the highest quality care—from prevention to treatment of the most serious and complex human diseases. The Health System includes more than 7,200 physicians and features a robust and continually expanding network of multispecialty services, including more than 400 ambulatory practice locations throughout the five boroughs of New York City, Westchester, and Long Island. The Mount Sinai Hospital is ranked No. 14 on U.S. News & World Report’s “Honor Roll” of the Top 20 Best Hospitals in the country and the Icahn School of Medicine as one of the Top 20 Best Medical Schools in country. Mount Sinai Health System hospitals are consistently ranked regionally by specialty and our physicians in the top 1% of all physicians nationally by U.S. News & World Report.