Home / Health and Medicine / Cystic fibrosis alters the structure of mucus in airways
29.06.2017

Cystic fibrosis alters the structure of mucus in airways 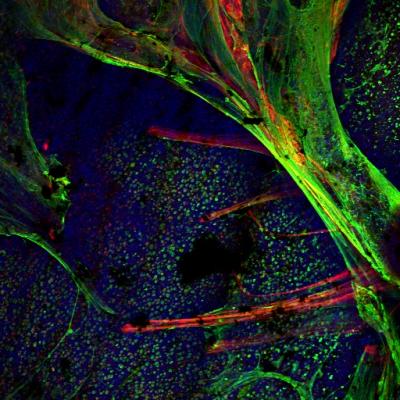 The image shows mucus in pig airway affected by cystic fibrosis (CF). The red strands of mucus (made of MUC5B protein) are more tangled than normal, and the green sheets of mucus (made of MUC5AC protein) are denser. These structural abnormalities may help explain why people with CF have difficulty clearing mucus from their lungs. Credit: University of Iowa Pappajohn Biomedical Institute

Mucus is important for maintaining healthy lungs. Inhaled particles, including bacteria and viruses, get trapped in mucus and then cilia — tiny hair like projections on the surface of the airway cells — sweep the mucus out of the airway.

In lungs affected by cystic fibrosis (CF), the mucus is abnormal and the lung-clearing process breaks down. This deficit may contribute to lung infections and inflammation that cause serious, life-shortening illness in people with CF.

In a new study, published in Proceedings of the National Academy of Sciences (PNAS) Early Edition, University of Iowa researchers led by Michael Welsh, MD, director of the UI Pappajohn Biomedical Institute, professor of internal medicine in the UI Carver College of Medicine, and a Howard Hughes Medical Institute investigator, and Lynda Ostedgaard, PhD, investigated how CF alters the structure of mucus produced in airway passages.

The study focused on two gel-forming mucin proteins, MUC5B and MUC5AC, that are the major components of airway mucus. Studying these two proteins in pigs, the researchers found that they have distinct and different structures and origins. MUC5B is produced by submucosal glands in the form of strands, while MUC5AC is secreted by goblet cells as wispy threads and thin sheets.

The study also showed that once these two types of mucus protein emerge onto the airway surface, they combine so that the MUC5B strands are partly covered with MUC5AC sheets. This overall structure may be helpful for capturing and clearing inhaled particles.

However, in pig airways that are affected by CF, these mucins look different. The strands of MUC5B become tangled, and often fill the submucosal gland ducts and fail to detach properly, and MUC5AC sheets are larger and more abundant.

“We generally think of mucus that covers the airways as a homogeneous material,” says Ostedgaard, UI research associate professor of internal medicine, and first author of the study. “This work reveals that mucus from submucosal glands and mucus from goblet cells have different morphological structures.

These structures may serve different purposes in clearing particulates and bacteria from our lungs. Our study also shows how these structures are abnormal in cystic fibrosis, explaining why patients with this disease have difficulty clearing mucus from their lungs.”

“Our observations make us think differently about how mucus functions in the airway, and how that might change in lung diseases like cystic fibrosis,” Ostedgaard says. A better understanding of the structure and proper function of airway mucus might help us understand how abnormal mucus develops in CF, and even point us to new ways to treat or prevent lung disease.”

The research was supported in part by grants from the National Heart, Lung and Blood Institute, the Cystic Fibrosis Foundation and the Roy J. Carver Charitable Trust.